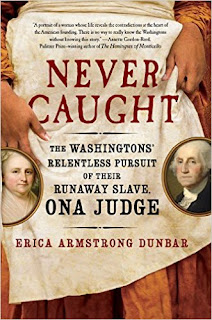 Never Caught: The Washingtons' Relentless Pursuit of Their Runaway Slave Ona Judge by Erica Armstrong Dunbar
Published February 2017 by Atria
Source: my copy courtesy of the publisher, through Netgalley, in exchange for an honest review

Publisher's Summary:
When George Washington was elected president, he reluctantly left behind his beloved Mount Vernon to serve in Philadelphia, the temporary seat of the nation’s capital, after a brief stay in New York. In setting up his household he took Tobias Lear, his celebrated secretary, and nine slaves, including Ona Judge, about which little has been written. As he grew accustomed to Northern ways, there was one change he couldn’t get his arms around: Pennsylvania law required enslaved people be set free after six months of residency in the state. Rather than comply, Washington decided to circumvent the law. Every six months he sent the slaves back down south just as the clock was about to expire.

Though Ona Judge lived a life of relative comfort, the few pleasantries she was afforded were nothing compared to freedom, a glimpse of which she encountered first-hand in Philadelphia. So, when the opportunity presented itself one clear and pleasant spring day in Philadelphia, Judge left everything she knew to escape to New England. Yet freedom would not come without its costs.

At just twenty-two-years-old, Ona became the subject of an intense manhunt led by George Washington, who used his political and personal contacts to recapture his property.

What I Didn't Like:
Never Caught, sadly, suffers from coming in my reading directly on the heels of Victoria: The Queen, a subject of which there is so much information it took 600 pages to include it all. Of course, much less is known about the life of a slave in 18th-century America; it stands to reason that the book would be much shorter but it also stands to reason that much would have to be inferred about Judge, rather than based on known facts about her.

Throughout the book, Dunbar tended to use phrases like "we can assume that" or "she would probably have." It's a small thing but, for me, the book would have been stronger if Dunbar had simply given us the facts that led her to those conclusions then let readers draw their own inferences or simply said something like "this being the case, it's possible that" or "given those circumstances, this might be why..."

What I Liked:
I learned a tremendous amount about George and Martha Washington when I read Ron Chernow's Washington so I was not under any illusions that the Washingtons were progressives when it came to matters of slavery. But, let's face it, the majority of  people are not delving into that 900 page behemoth; a bite-sized lesson like Never Caught is far more likely to be the way they will find out that although Washington treated his slaves better than many slaveholders, they were still his property and he was acutely aware of their value and his reliance on them. 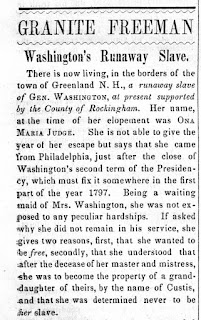 When Ona Judge dared to leave them, they knew they ran the risk that if they did not capture her, their other property might get ideas into their heads as well, something they couldn't tolerate. Furthermore, they were the most famous couple in this new country and their reputation was at stake, both in the eyes of other slaveholders and in those of the people already fighting against slavery. Once Judge made her escape, Dunbar had much more information to base the book on, the ads the agents for the Washingtons posted, the letters Martha wrote, and Judge's own story which she told to a couple of reporters late in her life. 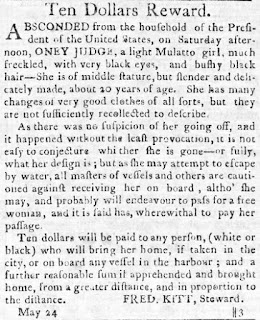 I had not been aware of how many people were already opposed to slavery eighty years before it was finally abolished, particularly in the city of Philadelphia. It would have been difficult for slaves to make the acquaintance of free blacks, but it was not impossible. The free blacks had a good system in place for assisting runaways and, although it was still not easy and extremely dangerous for all involved, many slaves made their way to freedom this way.

That guy we grew up believing was so honest he could not tell a lie? Yeah, he wasn't above using illegal methods to try to bring Judge back to Virginia. Fortunately for her, her own quick wits and some luck in the people that were hired to help Washington, Judge managed to elude her would-be captors. Even so, life for a free black was extremely difficult. This might go without saying; still, I learned a lot about the lengths they had to go to just to stay alive.


In the end, despite the terrible poverty she suffered most of her life after her escape, Judge still felt it was preferable to having remained a slave. That's a statement about slavery that's hard to ignore.
Posted by Lisa at 1:30 AM
Email ThisBlogThis!Share to TwitterShare to FacebookShare to Pinterest
Labels: biography, diversity, nonfiction, U.S. history