Life: It Goes On - September 9 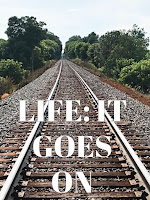 Yes, yes it does. Even if the Huskers lost their opening football game in a heartbreaker. On the plus side, the volleyball team game from 2 sets down to win a match this week so it wasn't all bad news in Huskerland. 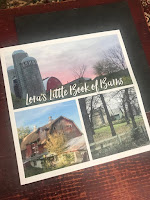 I don't think I mentioned last week that my new Sunday photo was taken by my sister. Last year, she and her husband moved to Wisconsin. It was a big adjustment for them but much more so for her. He had moved quite a lot growing up and was on the road a lot during the week anyway. She has spent most of her life within sixty miles from the town she was born in. She still socialized with friends from preschool. This move was tough. She took to hopping in her car and driving around the areas around her to get to know the place, to make things familiar and to fill the time when she would otherwise be alone. It became a therapy of sorts. Along the way, she has found a lot of beauty. She takes back roads. She stops her car alongside the road (or even in the middle of the road!) anytime she sees something that interests her. When we were up there last fall, we joked about her making a book of the pictures she's taken of the beautiful barns nearby. A couple of months later, she sent me that book. It holds a place of honor on my coffee table. She's branched out to much more than just barns in the year since. I think it may be time for a new book!

Listened To: I finished Born With Teeth  and then I started listening to Marisha Pessl's latest, Neverworld Wake; but decided about 20 minutes in that it was too similar to her Special Topics in Calamity Physics, which I just finished. I needed something completely different so now I'm on to Kate Atkinson's A God In Ruins. It's a long one so I'm going to have to listen to it as much around the house as possible to finish it in the seven days I have it.

Watched: Last night we finally watched The Greatest Showman. I have mixed feelings about it. I really found myself wishing the costumes had been more true to the time period (that's just my fashion education showing through, maybe?) and I couldn't help but remember that P. T. Barnum was not nearly the nice guy the show portrays him to be. And it annoyed me that when they were doing scenes with the entire cast performing, the camera nearly always stayed with a few characters. But I did really enjoy most of the songs, the message of the show, and I thought the performances were all solid. It's certainly a role Hugh Jackman was born to play.

Read: I raced through Tin Man by Sarah Winman, which I read on the strong recommendation of Ti of Book Chatter and was about to start Tatjana Soli's latest, The Removes, when I dropped it in the bathtub. Two days later, it is finally dry enough for me to read. I'll have to race through it to get a review posted for TLC Book Tours on Tuesday. Guess I'm not doing much beside reading today!

Made: I harvested rhubarb this week so I made a huge batch of rhubarb sauce (probably enough to get me through the winter) and a batch of rhubarb jam. Not a fan of the recipe, which didn't really thicken enough to be called jam, so I will try again with the next harvest.

Enjoyed: Decorating for fall this week. It's too early for me to go full out on pumpkins but I did get a dozen small pumpkins which I've used in a couple of rooms, as well as some mum plants (which may or may not survive long enough to get planted outside). As much as I have a hard time saying goodbye to summer, I was ready to change things up decor wise. Still not eating pumpkin spice anything, though.

Planning: A week of getting my house in order and projects done. The next couple of weeks are filling up with activities fast so I won't have much time for anything.

Thinking About: My brain has been in a bit of a debate this week. I'm pulled to set aside books for a while and focus on really making some changes around my house. But then I also have plotted out a reading schedule through the end of the year and requested a half dozen books on Netgalley.

Feeling: Frustrated. My parents kindly passed on a new-to-me monitor and I can't quite figure out how to get the screen sized right. I'm not computer illiterate and I can google the shit out of things so I've spent a fair amount of time this morning playing with it and I'm stumped. I need my Apple kid to swing by over his lunch break - it's probably a very simple fix. In the meantime, it works well enough for me to use and I am enjoying the bigger screen. Thanks, Mom and Dad!

Looking forward to: The Big Guy and I are going to see Julia Alvarez (In The Time of the Butterflies and How The Garcia Girls Lost Their Accent) this week.

Question of the week: I looked at my calendar for last week or so of September and thought "well, look how many things I'm doing," and was reminded of the days when I felt like it was a competition to be the busiest mom. I don't really miss those days and you all know how much I love a week with nothing on the calendar, so I don't know why I had that reaction. How about you - do you prefer a calendar with a lot of blank space for relaxing and just going about your lives or do you like to be full up with activities?

Posted by Lisa at 12:26 PM
Email ThisBlogThis!Share to TwitterShare to FacebookShare to Pinterest
Labels: Life: It Goes On