Spring Into Horror Readathon - Wrap Up 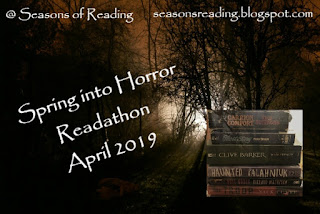 Now, I'm sure that you probably have forgotten that I told you I'd signed up for the Spring Into Horror Readathon (Seasons of Reading) because I haven't really read much that most people would think of as horror. But, here are the rules:

"Remember, the one main "rule" of Spring into Horror is that you must read ONE scary book (which can be a thriller, mystery, Gothic novel, or similar for those who are faint of heart). The rest of the month? Keep reading scary if you want, or read whichever genre you choose."

I actually did read several books that fall into the traditional definition of scary and spent the rest trying to read as much as I could. I actually finished seven books in April!  For the traditionally scary I read Agatha Christie's The Mysterious Affair At Styles and The Death of Mrs. Westaway by Ruth Ware. The scariest book I read in April wasn't either of these, though; it was Debra Gwartney's Life Through This. As I said in my review of that book, the scariest things for me to read about are the things that could actually happen and that book was about something that actually could have happened to me.

Did you read any scary books in April?

Posted by Lisa at 1:30 AM
Email ThisBlogThis!Share to TwitterShare to FacebookShare to Pinterest
Labels: Readathon