The Castle On Sunset by Shawn Levy

The Castle on Sunset:Life, Death, Love, Art, and Scandal at Hollywood's Chateau Marmont by Shawn Levy
Published May 2019 by Doubleday Books
Source: my copy courtesy of the publisher through Netgalley

Publisher's Summary:
For ninety years, Hollywood's brightest stars have favored the Chateau Marmont as a home away from home. An apartment house-turned-hotel, it has been the backdrop for generations of gossip and folklore: 1930s bombshell Jean Harlow took lovers during her third honeymoon there; director Nicholas Ray slept with his sixteen-year-old Rebel Without a Cause star Natalie Wood; Anthony Perkins and Tab Hunter met poolside and began a secret affair; Jim Morrison swung from the balconies, once falling nearly to his death; John Belushi suffered a fatal overdose in a private bungalow; Lindsay Lohan got the boot after racking up nearly $50,000 in charges in less than two months.

Perched above the Sunset Strip like a fairytale castle, the Chateau seems to come from another world entirely. Its singular appearance houses an equally singular history. While a city, an industry, and a culture have changed around it, Chateau Marmont has welcomed the most iconic and iconoclastic personalities in film, music, and media. It appeals to the rich and famous not just for its European ambiance but for its seclusion: Much of what's happened inside the Chateau's walls has eluded the public eye.

Until now. With wit and insight, Shawn Levy recounts the wild revelries and scandalous liaisons, the creative breakthroughs and marital breakdowns, the births and deaths that the Chateau has been a party to. Vivid, salacious, and richly informed, Levy's book is a glittering tribute to Hollywood as seen from inside the walls of its most hallowed hotel.


My Thoughts:
I'm not sure when I first became aware of the Chateau Marmont and the reputation it has had in Hollywood over the years of being "the" place to go for privacy. In all likelihood, it was in 1982, when comedian John Belushi died there. Since I became aware of it, more and more often I find in mentioned in articles or on television programs or in books. 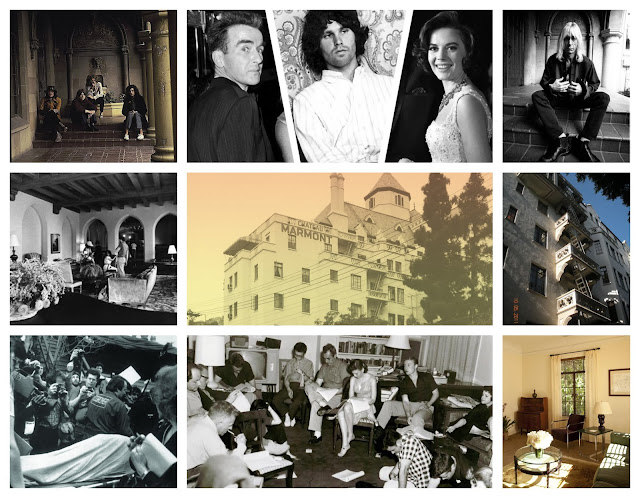 When it was built in 1926, it was built as an apartment building, close to Hollywood but not too close, on a dirt road that would become the Sunset Strip. Fred Horowitz had a vision - he just didn't have the money to make things work the way he wanted them to nor the real vision of what a building at that location could be. Over the years the hotel has had its ups and downs as it has changed ownership and the area around it has undergone changes. Because it was originally an apartment building, there are very few rooms at the Chateau and it lacked many of the amenities that the top hotels offered. It didn't include a full restaurant until the 1990's, for example. But it did have one thing that most other hotels didn't offer - place to go if you don't want to be seen and you don't want the world to know what you've been up to.

It's a reputation that all of the owners have worked to retain - it's the original "what happen here, stays here" place. It's been a refuge for those ending a marriage (including Desi Arnez), for writers to do the hard work (Dominick Dunne stayed frequently), and for rock stars to get crazy without landing themselves in trouble (Led Zeppelin had to be moved from the main building to the bungalows because of their antics). It's also been a place where things that were taboo in the wide world were overlooked and people of all colors were welcomed long before that was the norm.

Levy touches on all of the changes in ownership, focusing on just a few, and the people who worked at the hotel under those owners. In getting to know the owners, the book gets dull and sometimes it felt like Levy spent too much time focusing on what was happening to other businesses around the Chateau. All of that, I suppose, was necessary to get the full story - it just flattened out a book that otherwise bubbled with gossip.

The Chateau Marmont has an amazing history and I thoroughly enjoyed reading about how it has survived all of these years, the changes that have occurred all around it, and the things people have gotten up to while staying there.