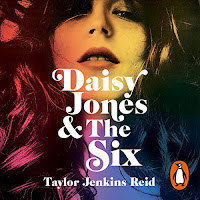 Publisher's Summary:
Everyone knows DAISY JONES and THE SIX, but nobody knows the reason behind their split at the absolute height of their popularity . . . until now.

Daisy is a girl coming of age in L.A. in the late sixties, sneaking into clubs on the Sunset Strip, sleeping with rock stars, and dreaming of singing at the Whisky a Go Go. The sex and drugs are thrilling, but it’s the rock ’n’ roll she loves most. By the time she’s twenty, her voice is getting noticed, and she has the kind of heedless beauty that makes people do crazy things.

Also getting noticed is The Six, a band led by the brooding Billy Dunne. On the eve of their first tour, his girlfriend Camila finds out she’s pregnant, and with the pressure of impending fatherhood and fame, Billy goes a little wild on the road.

Daisy and Billy cross paths when a producer realizes that the key to supercharged success is to put the two together. What happens next will become the stuff of legend.

The making of that legend is chronicled in this riveting and unforgettable novel, written as an oral history of one of the biggest bands of the seventies. Taylor Jenkins Reid is a talented writer who takes her work to a new level with Daisy Jones and The Six, brilliantly capturing a place and time in an utterly distinctive voice.


My Thoughts:
I grew up with music as a part of my life from the time I was a little girl; sometimes my dad allowed me to fall asleep on the living room sofa, listening to albums on the stereo. I came to love most kinds of music that way. But it was in the 1970's, as I went through my teens, that music became truly important to me. I listened to the radio every night and started buying 45's to play on the record player I had gotten when I turned ten. I listened to it all - Cat Stevens, ABBA, Donna Summers, The Eagles, The Beatles, The Rolling Stones, David Bowie, The Bee Gees, Queen, Elton John, Lynyrd Skynard, Led Zeppelin. I read Seventeen and Rolling Stone to keep up with the fashions and the bands.

Daisy Jones and The Six was like a step back in time for me. I could picture Billy in his Canadian tuxedo, Daisy in her short-shorts and tank top; I could almost hear the music they would have been making, knowing what was being done at that time. But even if you didn't grow up in the 1970's, this book will draw you in. If you've ever had a dream, if you've ever gone looking for love, if you've ever been in love with someone you can't have or who doesn't love you, if you've ever struggled with your demons, if you've ever felt under appreciated or overwhelmed, you will find a character in this book who speaks to you.

This book reads like oral history of Daisy Jones and The Six and the people involved in their lives; Jenkins Reid has said she styled it on VH1's Behind The Music and the documentary History of The Eagles. It's an incredibly unique story telling idea and I can't imagine trying to keep all of those story lines in check so that they could be layered over each other.

Kudos to the person(s) who made the decision to have each character read by a different person - it certainly makes it easier to track who is speaking but, more importantly, it makes it feel more real. And it really does feel real. I enjoyed it very much.

Posted by Lisa at 1:30 AM
Email ThisBlogThis!Share to TwitterShare to FacebookShare to Pinterest
Labels: audiobook, book review, music