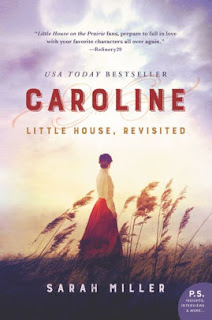 Publisher's Summary:
In this novel authorized by the Little House Heritage Trust, Sarah Miller recreates the beauty, hardship, and joys of the frontier in a work of historical fiction that illuminates one courageous, resilient, and loving pioneer woman as never before—Caroline Ingalls, "Ma" in Laura Ingalls Wilder’s beloved Little House books.

In the frigid days of February, 1870, Caroline Ingalls and her family leave the familiar comforts of the Big Woods of Wisconsin and the warm bosom of her family, for a new life in Kansas Indian Territory. Packing what they can carry in their wagon, Caroline, her husband Charles, and their little girls, Mary and Laura, head west to settle in a beautiful, unpredictable land full of promise and peril.

The pioneer life is a hard one, especially for a pregnant woman with no friends or kin to turn to for comfort or help. The burden of work must be shouldered alone, sickness tended without the aid of doctors, and babies birthed without the accustomed hands of mothers or sisters. But Caroline’s new world is also full of tender joys. In adapting to this strange new place and transforming a rough log house built by Charles’ hands into a home, Caroline must draw on untapped wells of strength she does not know she possesses.

My Thoughts:
Confession: although I read several of the Little House books when I was young, I never reread any of them and have very little recollection of the specifics of them, which makes it difficult for me to review this book as a comparison to Laura Ingalls Wilder's own Little House on the Prairie. That may  have been as beneficial to me as I read Caroline as it was a hinderance. In not being able to recall the source material, I was free to read this book without looking for the ways it mirrored, or did not, Wilder's book.

In a day and age where women were largely at the mercy of their husbands, Caroline Ingalls didn't have much say when her husband suddenly announced he had sold their home in Wisconsin and they would be moving to the Indian Territory in Kansas. Didn't ask her what she thought of the idea, didn't ask her if she wanted to go. Oh, and by the way, won't have room for any furniture and will need her to sew a canvas cover for the wagon. Also, going to be leaving in the winter on a journey that will take months. On the surface, Caroline in the book does what Caroline in real life probably did, bit her tongue and made the preparations. In Caroline, though, we get to see below the surface - the irritation Caroline feels about having to do all of this preparation to make a move she doesn't even want to make but can't speak out against and her deep sorrow about having to move away from a place where they are surrounded by family and friends.

We see the strain on Caroline, body and soul, during that long journey. By turns bored, frightened, tired of dealing with two little girls who have been cooped up in a wagon for hours on end, and frustrated with having to prepare meals from scratch, often without even a fire to cook them by. And did I mention that as much as you may be tired of your bra by the end of the day, Caroline was being pitched around on a wagon seat wearing a corset?

That corset pain is only one of the ways that Miller gives readers a glimpse into what life was really like for women in the late 19th century. No hospitals, no doctor nearby, and no one to deliver her baby who she trusts. No nursing bras or maxi pads for after the delivery - these are things Caroline will have to make. No town nearby if you run out of anything and no neighbors nearby to borrow from. It's not as though I had ever thought life was easy for women on the plains but Miller makes it very clear how very difficult even the most mundane things were and how mixed Caroline's feelings were about her life, her children and her husband.

But Caroline is going to stand by her man, not just because that's how it was done, but because she is very much in love with Charles. And when she listens to him talk about the new land and sees how his face lights up, she knows she will never tell him he is wrong. When they finally arrive in Kansas, though, she starts to see what he has been seeing, starts to fall in love with the place, despite the hardship and dangers.

Although the book frequently felt repetitive (yes, yes, we get that Charles is still hot for his wife), and often tedious, I really did enjoy seeing life from Caroline's point of view and the last hundred and fifty pages flew by for me. I know that Miller tried to hew true to the events of Wilder's book, but she also included more factual history of both the land and the life that the Ingalls lived. I think that made for a work of historical fiction that felt real but will still make fans off Wilder's book happy.