Northern Lights: One Woman, Two Teams, and The Football Field That Changed Their Lives by Cathy Parker with David Thomas
Published June 2019 by Nelson, Thomas Inc.
Source: my copy courtesy of the publisher, through Netgalley, in exchange for an honest review

Publisher's Summary:
Life is hard in Barrow, Alaska. Football mom Cathy Parker first caught a glimpse of this far-away reality from the comfort of her Jacksonville, Florida, living room while watching a 2006 ESPN report on the Barrow Whalers, a high school football team consisting mostly of Alaskan Inupiat Eskimo natives playing in the most difficult of conditions and trying to overcome the most unlikely of odds. These players—raised in the northernmost town in the United States, where drug abuse is rampant and the high school dropout rate is high—found themselves playing on a gravel field, using flour to draw the lines. And while the community of Barrow felt a strong pride for their boys, many felt football was not worth the investment. That is, until Cathy Parker became involved.

Overcome by a surprising stirring in her soul to reach out and help, Cathy was determined to build a suitable field for the Barrow Whalers. Not fully understanding the many obstacles, both financially and logistically, that would line the path ahead, Cathy charged forward with a determined spirit and a heart for both the football team and the greater community of Barrow. She spearheaded a campaign that raised more than half-a-million dollars through people all around the country rallying around one common goal: changing the lives of young men through football.

This is not just the story of how the Barrow Whalers became the first high school above the Arctic Circle to have a football program. This is the story of how we are sometimes called to the most unlikely of causes and to believe in something a little bit bigger, changing our own lives and the lives of others for the better in the most unexpected of ways.

My Thoughts:
You all know how much I love football so this one was kind of a no-brainer for me, a story about how a group of people came together to help a football program succeed where it was absolutely essential that it do so.

For Barrow, being able to have a football program meant having something for their young men to do, something for their community to come together around. But when you live where grass won't grow and where the ground is permanently frozen, having a field that's usable is all but impossible. In fact, the field was so bad, other teams were no longer willing to go to Barrow to play. Since the schools are so far apart, and there's no way into Barrow except by air or sea, flying is the only way for the teams to travel. If no one was willing to come to Barrow, the Barrow team was going to have to pay to fly to all of their games. Add to that a team that was largely made up of young men who had never played football before and coaches with little to no experience, and you can see why the school was in danger of losing their football program.

And then Cathy Parker saw that ESPN story. Cathy would be the first to admit that she is a big idea person who figures out how to make something work after the fact. Getting an artificial turf field for Barrow was one of those ideas. If she would have had any idea how logistically difficult it would become when she started, she might have gone to sleep that first night thinking "it would be great, but..." Luckily for the people of Barrow, she didn't. Not only did she never give up on giving Barrow a football field, she found a way to bring the entire Barrow team to Florida to learn football the way her own sons' football coach taught it. When the Barrow team returned home, they took with them more than lessons in how to play the game of football better, but lessons about discipline, hard work, and integrity. They went away with everything that's good about participating in organized team sports. 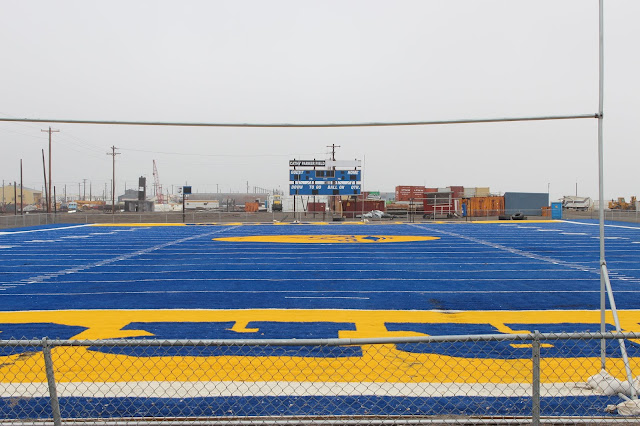 What's more, having that field brought the town together. It gave them a place to gather, a place they could have a picnic (assume you're game for a picnic in a place where summer means highs in the 40's), and young men with hope. Eleven years after the field was put in, Parker returned to Barrow and found a town that had been revitalized.

There's a lot about Parker's family in the book and early on I began to wonder if it was too much. But Parker was setting things up so that readers would know that she understood both the pros and cons of organized sports. The Parkers also understood the high costs, both literal and figurative, that sports can exact. More than once, football had caused problems in their marriage and Cathy is, justifiably, happy to let readers know what her family gained by this experience.

What's missing in that publisher's summary, and I had to go back and re-read that after I read the book to see if I'd missed it, is religion. Parker feels that she was called by God to bring that field to Barrow and her religion plays a big part in this book. Again and again, she talks about being certain that the power of prayer helped smooth over the seemingly insurmountable problems that came up again and again. She talks about church and religion a lot and it sometimes felt like too much for me, not the story I was looking for. But I had to keep reminding myself that whatever compelled Parker to push so hard for those young men, I was happy, for their sakes, for it.

Despite my quibbles with the book, I really enjoyed reading about how so many people came together to provide the community of Barrow that football field and the young men of Barrow hope and a future.
Posted by Lisa at 1:30 AM
Email ThisBlogThis!Share to TwitterShare to FacebookShare to Pinterest
Labels: book review, netgalley, nonfiction, sports