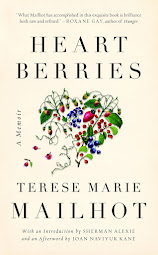 Heart Berries by Terese Marie Mailhot
124 pages
Published February 2018 by Catapult
Publisher's Summary:
Having survived a profoundly dysfunctional upbringing only to find herself hospitalized and facing a dual diagnosis of post traumatic stress disorder and bipolar II disorder, Terese Marie Mailhot is given a notebook and begins to write her way out of trauma. The triumphant result is Heart Berries, a memorial for Mailhot's mother, a social worker and activist who had a thing for prisoners; a story of reconciliation with her father―an abusive drunk and a brilliant artist―who was murdered under mysterious circumstances; and an elegy on how difficult it is to love someone while dragging the long shadows of shame.

Mailhot trusts the reader to understand that memory isn't exact, but melded to imagination, pain, and what we can bring ourselves to accept. Her unique and at times unsettling voice graphically illustrates her mental state. As she writes, she discovers her own true voice, seizes control of her story, and, in so doing, reestablishes her connection to her family, to her people, and to her place in the world.

My Thoughts:
This book was highly recommended by Lizzi (IG bookish_lizzi), whose book recommendations I've been following since before I began blogging. Lizzi called this a "powerful memoir of fighting to survive and thrive," and said it is "Definitely worth reading." I requested it immediately from the library and picked it up a couple of days later. Then I realized that it was maybe not the book for me just now. But I know myself and knew that if it went back unread, it would likely never be read. I'd forget about it, lost under the mental piles of books that came to my attention after I took it back.
It is, as Lizzi said, a powerful memoir, painful to read in its rawness. Mailhot grew up on the Seabird Island Indian Reservation in British Columbia and her indigenous culture plays a big part in her writing in so many ways. I'll be honest - I wasn't always sure exactly what Mailhot was trying to say when she went to that place but the emotion of what she was saying was always clear. She is often filled with rage, frequently shocking, always trying to find ways to live with her pain.
Because this maybe wasn't the right time for me to read this book, I'm not sure it impacted me as much as it might have another time in my life. It meanders and can feel disjointed; but that may have as much to do with the way it was written from her journals, begun when she was hospitalized. It is, for sure, an eye-opening account of the ways white people have damaged indigenous peoples, creating a ripple effect that carries down through the generations.
Others have written much more eloquently about Heart Berries. The Guardian reviewer, Diana Evans, says of this book:

"This is a slim book full of raw and ragged pain, the poisonous effects of sexual abuse, of racial cruelty, of violence and self-harm and drug addiction. But it is not without a wry, deadpan humour and clever derision. Its quiet rage is directed outwards towards the intangible yet definitive (white supremacy, male supremacy), the unjust shape of the world, while a deep tenderness and empathy are shown to those who share in the author’s vulnerability – her sons, her mother, even her father: “I don’t think he was wrong for demanding love – it was the manner in which he asked, and whom he asked that was unforgivable.” Her mother, in all her dysfunction, her societal powerlessness, is portrayed as a kind of quirky triumph of parenting against the odds, serving her children badly cooked wild rice, encouraging them to beat pillows or rugs when misbehaving, “because she wanted us to release our tensions”. The result of this wise yet flailing caring is a spiritual mother-daughter bond that continues beyond the grave."

I would certainly recommend this one - just know what you are getting in to when you begin and read it when your mood is right and you are mentally able to handle it.
Posted by Lisa at 1:30 AM
Email ThisBlogThis!Share to TwitterShare to FacebookShare to Pinterest
Labels: book review, diversity, library, memoir, Native American