All Things In Common - Terezin

Last November I read and reviewed Alyson Richman's The Lost Wife. While I didn't love it as much as some other reviewers, I did appreciate, that it taught me something new about World War II.


Richman managed to bring something new to my understanding of what happened to the Jews during this horrible time by putting Lenka's family in Terezin. By putting Lenka and her mother into work assignments that allowed them interaction with the artwork done at Terezin, she allowed me to learn not only about the artwork the Jews were forced to do for the Nazis but about the way the Jews used artwork as a means of rebellion.

Here was this part of World War II that I had never heard of and didn't know for sure was real until I did some research.


Art really was used as a way to rebel and the children really did create artwork. After the war, over 4000 works of art created by the children and hidden by their teacher, Friedl Dicker-Brandeis, were discovered. 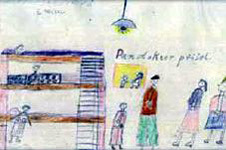 One of the works of art discovered after the war was painted by Milena Deimlovd, a cousin of Madeleine Albright. In Prague Winter, Albright devotes the better part of a chapter to Terezin as she explores the fate of her uncle, aunt and cousin. Of Terezin, Albright writes:


"Only the Nazis would think to improve their public image by establishing a concentration camp. Terezin was a prison disguised as a town. In addition to the post office, there was a coffeehouse with a band called the Ghetto Swingers, but the "coffee" was made from a blend of herbs and turnips. The one food consistently available was mustard. There were shops, but most of the merchandise had been confiscated from prisoners. The joke went round that Terezins boutiques were the world's finest, because only there could you buy a shirt that already had your own personal monogram."

At Terezin "The Nazis deprived inmates of their physical freedom but not of their capacity to think - and to do so about far more than the terrors of the situation." Prisoners exchanged ideas, produced musical programs, and insured that their stories would reach the outside world through artwork smuggled out.

It astonishes me that, despite a severe shortage of food, terrible overcrowding, an utter lack of hygiene, and the constant fear of death, so many of the people who passed through Terezin managed to hold onto their humanity and to summon up a strength most of us cannot begin to imagine.
Posted by Lisa at 1:30 AM