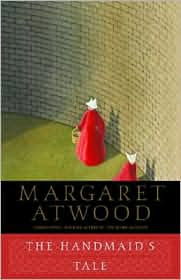 In our conversations about this book, one of the things that we've talked about it "freedom from."  In the society in this book, residents are largely free from decision and, for the most part risk.  Offred and the other women are able to walk down the street and feel entirely safe, free from worry.  But is this kind of freedom women want?
Posted by Lisa at 11:13 PM
Email ThisBlogThis!Share to TwitterShare to FacebookShare to Pinterest
Labels: book review, dystopian fiction, readalong, women's fiction