When I was growing up there seemed to be two kinds of fairy tales: those that dealt with living happily-ever-after and those that didn't. Now I enjoyed those that didn't, to be sure, but it was those happily-ever-after ones that grabbed a young girl's heart as she grew. Cinderella and Prince Charming, Sleeping Beauty and Prince Phillip, Snow White and her prince...what young girl wouldn't be dreaming of finding her own Prince Charming. Even the idea of having to kiss a frog to get there wasn't so bad if it meant you'd find the man of your dreams.

I have long since learned that just because a girl may find a man she loves and wants to spend the rest of her life with, happily-ever-after is a myth. As it turns out, it never really happened in the fairy tales most of the time either, not as they were originally told. Over the past year, I've looked at the reality of Cinderella and the like and discovered that there really isn't much to be learned about love in them at all.

At Folk Tales Corner, I found an interesting and amusing article on this very subject.  They say that a young man will need three or more of these characteristics to find romance in a fairy tale:

For the young ladies, you'll only need one of these characteristics, preferably #3, although #4 is almost always a given: 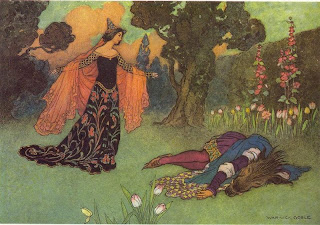 If you're really looking for fairy tales that give them impression that the happy couple may truly find lifelong happiness after the story ends, you're bound to find that the pair have had to suffer to get to that point.

In the Rapunzel tale, that prince was thrown from a tower, blinded by thorns and left to wander for a couple of years before Rapunzel found him and restored his eye sight with her tears. He wasn't alone in his suffering - poor Rapunzel had to give birth to twins all alone in the wilderness.

The Beauty and the Beast tale may give the reader the most hope for finding true love if you're a good enough person. In it, a young prince was turned into a beast for being such a terrible person. Not until he could make someone love him despite his appearance would he be changed back. He had to learn be kind and generous in order to do that. The Beauty was willing to give up her freedom to save her beloved father. Both found love because of what was inside of them, not their outside appearance, and truly did get the happily ever after. I've never tried to sell my daughter on the idea of happily-ever-after but I like that I have this story to use as an example of looking deep inside to find the person you should be with for the rest of your life.
Posted by Lisa at 6:00 AM
Email ThisBlogThis!Share to TwitterShare to FacebookShare to Pinterest
Labels: Fairy Tale Fridays