It's been years since I read Hans Christian Andersen's original tale of The Mermaid (who, by the way, in my copy at least, wasn't little). The closest I've come to it in the past twenty years is repeated viewings of the Disney adaptation. Just after Christmas, though, I picked up a copy of Andersen's Fairy Tales and The Mermaid was the first tale in the book, making it the perfect place to start.

On her fifteenth birthday, the youngest daughter of the king of the mermen is at long last allowed to travel to the surface of the ocean. There she sees a ship with a handsome prince traveling on it and she is immediately smitten. As she watches him, a storm comes up and the prince is thrown into the sea. The mermaid saves the prince, depositing him on the beach where a young woman finds him. The prince, who had been unconscious for some time, awoke, believing this young woman had saved him.

The mermaid continued to travel to the surface to watch the prince from the distance. As her love for him grew, she became determined that she must be with him. She has also been told that humans, unlike merpeople, have souls, making them immortal. The mermaid had long yearned to have a soul and decided to visit a witch to see if her dreams might be made to come true. The witch assures the mermaid that she can be made human but she warns the mermaid that the pain of her tail separating intolegs will be excruciating and that the price of becoming human is the mermaid's voice. Furthermore, if the mermaid is unable to win the prince's heart and he marries another, then the mermaid will die and return to the sea as foam. Despite all of that, the mermaid agrees and the witch cuts out her tongue.

The mermaid swims to shore, drinks the potion and is found sometime later by the prince. He is enchanted by her beauty, as is the kingdom. But the prince cannot stop thinking of the young woman he believes saved his life. When she turns out to be the daughter of another king, and not a religious woman as he believed, he marries her. The mermaid is devastated and prepares to die. Just as that begins to happen, she is visited by the daughters of the air, who tell the mermaid that if she joins them and does good deeds for three hundred years then she will earn a soul. It's a price she is more than willing to pay.

Reading the original tale gave me a much greater appreciation for what Carolyn Turgeon has written in Mermaid. In it, she retained much of the original story, playing up the darkness that Andersen only hinted at. What struck me most about Andersen's tale was not the love story between the prince and the mermaid but the story about the mermaid's desire for an eternal soul, something that makes the story even more universal.

In My Mother She Killed Me, My Father He Ate Me (edited by Kate Bernheimer), Katherine Vaz has used the tale of the mermaid as the inspiration for her story "What the Conch Shell Sings, When The Body Is Gone." She was also influenced by the story of the real life Million-Dollar Mermaid, Annette Kellerman, a woman who performed self-styled ballet inside water-filled tanks.

Vaz tells the story of Meredith and Ray, a couple who started as friends and eventually married. By the time we meet them, however, Meredith and Ray are hardly talking. Meredith suspects, rightly, that Ray is having an affair. When she confronts him, she warns him that the other woman is only using Ray to promote her own career. The two divorce and Ray marries the other woman, only to find out that Meredith was right. Years later, when Ray is again divorced and Meredith finds herself battling breast cancer, the two find themselves together again, more in love than ever.

As I was reading this story,  I didn't initially understand where the story of The Mermaid had played a part, beyond obvious references to the ocean plants and tank that Ray and Meredith had installed in their house to practice holding their breath under water. But as I read, I was able to see the influence. Ray allowed himself to be drawn from the woman he truly loved to marry the woman he thought was 'saving" him. As with the tale of The Mermaid, What The Conch Shell Sings is the story of a love triangle but also the story of eternal love.

As with all of the stories in My Mother She Killed Me, I very much enjoyed Vaz's explanation at the end of the story of how she came to write it. She had long been interested in the life of Annette Kellerman and even a walk through a perfume department in a store played a part in her story. 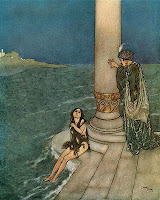 Next week, I'll be reading stories about The Little Match Girl, including the original tale and an adaptation from My Mother She Killed Me. I'll also be looking at how that one has been sanitized for children.
Posted by Lisa at 1:17 PM
Email ThisBlogThis!Share to TwitterShare to FacebookShare to Pinterest
Labels: Fairy Tale Fridays, fairy tales