American Eve: Evelyn Nesbit, Stanford White The Birth of The "It" Girl and The Crime of the Century " by Paula Uruburu

American Eve Evelyn Nesbit, Stanford White The Birth of The "It" Girl & The Crime of the Century by Paula Uruburu
400 pages
Published April 2009 by Penguin Books
Source: bought it after hearing about it on NPR

Florence Evelyn Nesbit was born into the upper middle class. Unfortunately, when her father died it was discovered that he had been quite a bad businessman who left his widow, daughter and son, Howard in dire circumstances. Mrs. Nesbit proved to be hopeless when it came time to provide her children. Before long the trio was shuffling from rundown boardinghouse to rundown boardinghouse until the day Evelyn is literally "discovered" on the street by an artist who wanted to paint her picture.

Soon the beautiful young girl was earning enough as a popular artist's model to support her family and they were lured to New York where Evelyn quickly became the muse of artists and photographer's alike. Her likeness appeared on sheet music, in advertisements and even in the paintings hung in churches.

When Evelyn's dreams took her to the stage, her life changed even more rapidly. Young and old, rich and poor - men began sending her love letters, flowers and begging for her time. She had very little interest in any of them, although her dear mama was more than willing to allow some of the wealthy, older gentlemen to fawn over her sixteen-year-old daughter.

Enter Stanford White, leading architect and notorious consumer of young girls. For months White showered Evelyn, her mother and her brother with his largess, moving them into better lodgings, paying for young Howard's education, and providing Evelyn with all manner of diversions. One horrible night, White finally showed his true colors; he drugged Evelyn and raped her. For some time afterward she shunned him but she had so loved him that before long she forgave him. The two began an affair that lasted until Evelyn began to suspect White of having other girls as well. She sought out the attention of Jack Barrymore (who would come to prominence as actor John Barrymore), initially to make White jealous but eventually she grew very fond of him. In fact, the two became engaged until Mama Nesbit and Stanford White stepped in to put an end to it. 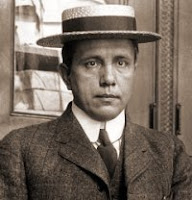 The void left room for a third man who had had his eye on Evelyn for some time, Harry K. Thaw of Pittsburgh. Thaw was by turns an evangelical and a rounder with a brutal streak. He spent more than a year wining over Evelyn and convincing her to marry him which she finally did despite his having beaten and raped her on a trip to Europe. 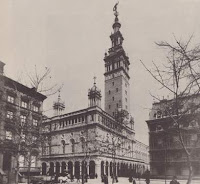 Thaw had another obsession that would be the downfall of both himself and Evelyn - he abhorred Stanford White and was incessant in his belief that he must make White pay for his sinful ways. When he found out what White had done to Evelyn, he became more enraged than ever. When other methods proved inadequate, Thaw took matters into his own hands. One night, in front of hundreds of witnesses, Thaw shot White to death on the rooftop theater of White's own Madison Square Garden. 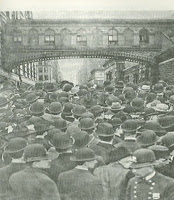 Thousands gathered daily as the trial of the century commenced. Crowds gathered on the streets below the so-called Bridge of Sighs, a walkway between the jail and the courthouse hoping to catch a glimpse of Thaw as he made his way to first one and then a second trial. Mother Thaw's vast resources managed to keep Harry out of jail but they couldn't keep him out of the insane asylum. Poor Evelyn was forced during both trials to testify as to what White had done to her and, although the public initially took pity on her, her life was never the same. At the age of twenty-one, the once rising star was a divorcee with a young son. She lived another sixty-five years but life was hard for the woman who had once been the face of a new century.

I was drawn to this book because Evelyn, Thaw and White were all characters in E. L. Doctorow's Ragtime, a book I adored.


"To anyone familiar with E. L. Doctorow's novel Ragtime, the name Evelyn Nesbit may evoke the mauve-tinted crucible of the sentimentality inclined and cynically named Gilded Age. To others, it may signify passion and perversion, murder and scandal, "love, hate, villainy, perfidy, and outraged innocence." The extinction of an era. And a red velvet swing."

I have always wondered about Evelyn Nesbit and when I heard about this book I knew it was one for me. Uruburu did not disappoint. The book is well-researched and works on many levels, as a fine piece of story telling, recounting of historical and a look a society as the country was caught between one way of live and another.
Posted by Lisa at 6:00 AM
Email ThisBlogThis!Share to TwitterShare to FacebookShare to Pinterest
Labels: book review, nonfiction, U.S. history