All Things In Common - Manchuria

With all of the time periods, all of the places in the world, all of the themes there are to write about, I'm always surprised to find myself reading about something I've only just recently read about, particularly when it's something that I don't usually find in my reading. Recently that's happened twice to me.


In Haruki Murakami's The Wind Up Bird Chronicle, the Japanese invasion of Manchuria played a major part in the story. In a book filled with some really gruesome scenes, all of them played out in Manchuria. It was a time and place I knew almost nothing about and the book gave me the incentive, as books so often do, to learn more about this time and place. It's almost inconceivable to imagine that a country as small as Japan would think to seize a piece of land that was under Chinese control at the time but which also bordered on Russia. 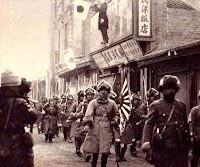 Not only did the Japanese invade Manchuria, they established one of the most brutally run regions in the world as I was soon to learn more about when the next book I picked up was Jennifer Cody Epstein's The Gods of Heavenly Punishment. In it, one of the key scenes involves an incident of cruelty by a Japanese character who is working in Manchuria with the military. It's an event that will have long-reaching impact in the book and particularly plays up the brutality and heartlessness of those in charge. As did Laura Hildenbrand's Unbroken, this book made me understand why so many carried so much hatred toward the Japanese for so long.
Posted by Lisa at 1:30 AM
Email ThisBlogThis!Share to TwitterShare to FacebookShare to Pinterest