The Chalice by Nancy Bilyeau

The Chalice by Nancy Bilyeau
Published March 2013 by Touchstone
Source: my copy courtesy of the publisher and TLC Book Tours in exchange for this honest review

Publisher's Summary:
In 1538, England’s bloody power struggle between crown and cross threatens to tear the country apart. Novice Joanna Stafford has tasted the wrath of the royal court, discovered what lies within the king’s torture rooms, and escaped death at the hands of those desperate to possess the power of an ancient relic.

Even with all she has experienced, the quiet life is not for Joanna. Despite the possibilities of arrest and imprisonment, she becomes caught up in a shadowy international plot targeting Henry VIII himself. As the power plays turn vicious, Joanna realizes her role is more critical than she’d ever imagined. She must choose between those she loves most and assuming her part in a prophecy foretold by three seers. Repelled by violence, Joanna seizes a future with a man who loves her. But no matter how hard she tries, she cannot escape the spreading darkness of her destiny.

To learn the final, sinister piece of the prophecy, she flees across Europe with a corrupt spy sent by Spain. As she completes the puzzle in the dungeon of a twelfth-century Belgian fortress, Joanna realizes the life of Henry VIII as well as the future of Christendom are in her hands—hands that must someday hold the chalice that lies at the center of these deadly prophecies.

My Thoughts:
It's been a long time since I went straight from one book straight into the next book in a series (maybe since Mini-me and I read A Series of Unfortunate Events!!) so I was a bit hesitant about doing just that. If you love the first book, can the next one live up to it? If the author is striving to make the second book capable of being a stand alone book, will there be too much retelling of the original story?

The Chalice could be read as a stand-alone book; Bilyeau does an excellent job of working the background information from The Crown into The Chalice. Once again Joanna Stafford is at the center of the story but this plot is much more complex and if I had not just read The Crown it really would have been difficult to keep track of the players without a scorecard.

There is much more going on in this book and it feels very much like a roller coaster ride. It sometimes felt like too much as Joanna moved from one dangerous situation into another, with periods of surprising calm interspersed. In The Chalice I felt much less like Joanna was the plucky little heroine who stands up to the powers that be and much more like someone who continually misreads situations, putting herself and others in harms way making it harder to like her. And prophecy and seers? We're treading on fantasy reading here, folks, and you know I always have a hard time buying into that. Still, I couldn't help but get caught up in The Chalice and Joanna's quest, which, when it comes right down to it, was less about saving England and more about making England a place where she could live her life in safety, surrounded by those she loved. When you bring the big story down to that, it's hard not to like the book.

Readers are, once again, fully immersed in a time and place and by taking the story out of England, Bilyeau is able to help the reader grasp the bigger picture of what was happening in the world. I haven't read a lot of historical fiction set in the time of Henry VIII and I've certainly never read one written from the perspective of the Catholics. In some ways, coming from that point made the outcome of the story much more of a mystery. I know that Catholicism never regained it's grip over England so how could Joanna succeed in her mission to restore it?

For other opinions about this book, check out the full tour. 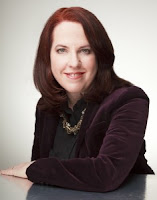 Nancy Bilyeau is a magazine editor who has worked at such publications as Rolling Stone and InStyle and is now the executive editor of DuJour. A native of the Midwest, she earned a bachelor’s degree from the University of Michigan. She researched and workshopped her first novel, The Crown, for five years before finding an agent and selling it in an auction to Touchstone/Simon&Schuster in 2010. For The Chalice, she traveled to England to do in-depth research into the tumultuous late 1530s of the Tudor era. She lives in New York City with her husband and two children. For more information about Nancy and her work, visit her website at nancybilyeau.com.
Posted by Lisa at 7:05 AM