The Hunt For Hitler's Warship by Patrick Bishop - Guest Review

The Hunt for Hitler's Warship by Patrick Bishop
Published: April 2013 by Regnery History
Source: our copy courtesy of the publisher and TLC Book Tours

This is a guest review by my husband who is every bit as apt to pick up non-fiction as fiction but who will not abide a dull book. He has no time for them. Thanks, Big Guy, for this review!

Publisher's Summary:
Winston Churchill called “the Beast.” It was said to be unsinkable. More than thirty military operations failed to destroy it. Eliminating the Tirpitz, Hitler’s mightiest warship, a 52,000-ton behemoth, became an Allied obsession.

In The Hunt for Hitler’s Warship, Patrick Bishop tells the epic story of the two men who would not rest until theTirpitz lay at the bottom of the sea. In November of 1944, with the threat to Russian supply lines increasing and Allied forces needing reinforcements in the Pacific, a raid as audacious as any Royal Air Force operation of the war was launched, under the command of one of Briain’s greatest but least-known war heroes, Wig Commander Willie Tait.

Bishop draws on decades of experience as a foreign war correspondent to paint a vivid picture of this historic clash of the Royal Air Force’s Davids versus Hitler’s Goliath of naval engineering. Readers will not be able to put down this account of one of World War II’s most dramatic showdowns. 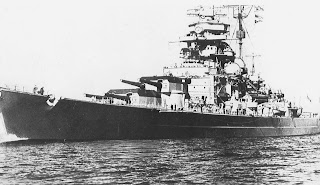 As I have a bit of interest in WWII and especially the German machine that Hitler built and  heroic ways the Allied team was able to score a victory in Europe, this book was of interest from the outset.  I had heard of the Bismark, but did not know much about it's sister boat the Tirpitz.

The story was well told in that it provided what you need to know in technical detail about the boat and other airplanes, subs and ships involved without the level of detail that becomes boring.  It sites the many attempted missions on the Tirpitz and the various groups of merchant ships and protective vessels coming across the Atlantic to help arm the Soviets.  You are also able to get a taste of Churchill's resolve when it came to neutralizing this vessel and defeating Hitler in general.


Part of the reason the Tirpitz is not as much of a household name as the Bismark is because after the sinking of the Bismark (quickly outlined in the early part of this book), Hitler was pretty protective of her.

As I discovered it was used as more of a 'large club' at the ready in the hands of the Germans causing US and Britain to tread carefully in delivering goods to the Soviet Union and use a great deal of resources to protect the shipments and to protect our own warships, that could have been used in other theaters of the war.

I also did not know how much the Soviet Union was unappreciative of the Allied support when the American and British put so many lives on the line and lost thousands to help arm them against Hitler's Eastern push.

Again, the book reads reasonably light for the history of a fairly specific part of WWII, but it encompasses many interesting aspects of the war on both sides.  A very enjoyable read for anyone liking history especially that of WWII.