The Lady And The Unicorn by Tracy Chevalier

The Lady And The Unicorn by Tracy Chevalier
Published December 2003
Source: I have two copies, print and audio. I have no recollection of where the print copy came from. If I borrowed it from you, please let me know so I can return it! The audio copy I bought.
Narrated by: Robert Blumenfeld and Terry Donnelly

Publisher's Summary:
A set of bewitching medieval tapestries hangs today in a protected chamber in Paris. They appear to portray a woman's seduction of a unicorn, but the story behind their making is unknown - until now.

Paris, 1490. A shrewd French nobleman commissions six lavish tapestries celebrating his rising status at Court. He hires the charismatic, arrogant, sublimely talented Nicolas des Innocents to design them. Nicolas creates havoc among the women in the house - mother and daughter, servant and lady-in-waiting - before taking his designs north to the Brussels workshop where the tapestries are to be woven.

There, master-weaver Georges de la Chapelle risks everything he has on finishing the tapestries - his finest, most intricate work - on time for his exacting French client. Ill-prepared for temptation and seduction, he and his family are consumed by the project and by their dealings with the full-blooded painter from Paris." The results change all their lives - lives that have been captured in the tapestries, for those who know where to look. 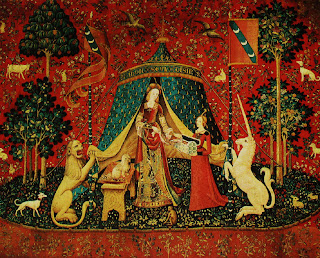 My Thoughts:
As she did with The Girl With The Pearl Earring, Chevalier builds a story around a masterpiece about which not much is known, in this case a series of tapestries showing the seduction of a unicorn. The artist and weaver of the tapestries is unknown giving Chevalier free rein to build a story around the creation of the six works. Using more than a half dozen narrators, Chevelier moves her story forward in a more complex way than I've seen used before. The two narrators did a marvelous job with this big job, creating unique voices for each character.

Chevalier is nothing if not thorough in her research. I swear I could weave a tapestry...and that's my biggest quibble with this book. I'm certainly interested in learning about the process but I definitely don't want to feel like I'm capable of handling a loom by the end of a book.

Given Chevalier's skill, I'm certain that I'll be reading more of her work. The woman is a master at recreating a time and place.