All Things In Common - Tapestries

Tapestries - something I can't recall ever having played a significant role in any book I've ever read. That is until I read Tracy Chevelier's The Lady and The Unicorn a book entirely created around a series of six tapestries woven in Flanders in the late fifteenth century. In my review of the book, I suggested that I might actually be able to weave a tapestry, Chevelier had included so much detail.

Then I picked up Nancy Bilyeau's The Crown in which the nuns at a priory are known throughout England for their magnificent tapestries. Bilyeau didn't include nearly as much detail about the process but I didn't need it to picture the process, the materials used, the time involved. Suddenly I was grateful to Chevelier for giving me the information to make other books more enjoyable. 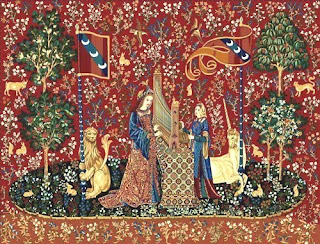 
Tapestry is a form of textile art, traditionally woven on a vertical loom. However, it can also be woven on a floor loom as well. It is composed of two sets of interlaced threads, those running parallel to the length (called the warp) and those parallel to the width (called the weft); the warp threads are set up under tension on a loom, and the weft thread is passed back and forth across part or all of the warps. Tapestry is weft-faced weaving, in which all the warp threads are hidden in the completed work, unlike cloth weaving where both the warp and the weft threads may be visible. In tapestry weaving, weft yarns are typically discontinuous; the artisan interlaces each coloured weft back and forth in its own small pattern area. It is a plain weft-faced weave having weft threads of different colours worked over portions of the warp to form the design 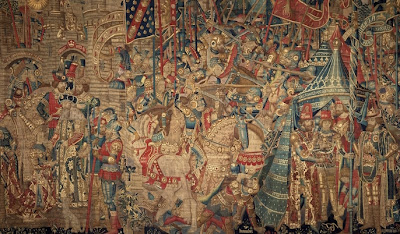 Tapestries were not only decorative, they were practical as well. Being portable, those who could afford them and had multiple homes were able to take their artwork from home to home. More importantly, the tapestries served as insulation. Images included biblical, mythological, and hunting scenes as well as recreating important events such as battles or coronations. Threads might have been wool, cotton, silk, gold and silver. As you can well imagine, a large tapestry might take as long as a year to create. The series referenced in The Lady and The Unicorn took two years to create. Conditions at the time the series was created would have been difficult at best, the rooms where the weaving was done could not be heated as there couldn't be any fire in the room and the weaving could only be done in daylight hours. In Brussels, unions were formed to control the hours weavers could work, to prevent women from becoming weavers and they were allowed final approval of work before it was released to the buyer. And I thought being an artist these days was difficult!