Fairy Tale Fridays: The Fairest of Them All by Carolyn Turgeon

The Fairest of Them All by Carolyn Turgeon
Published August 2013 by Touchstone
Source: my copy courtesy of the publisher in exchange for an honest review

Publisher's Summary:
In an enchanted forest, the maiden Rapunzel’s beautiful voice captivates a young prince hunting nearby. Overcome, he climbs her long golden hair to her tower and they spend an afternoon of passion together, but by nightfall the prince must return to his kingdom, and his betrothed.

Now king, he weds his intended and the kingdom rejoices when a daughter named Snow White is born. Beyond the castle walls, Rapunzel waits in her crumbling tower, gathering news of her beloved from those who come to her seeking wisdom. She tries to mend her broken heart but her love lingers, pulsing in the magic tendrils of her hair.

The king, too, is haunted by his memories, but after his queen’s mysterious death, he is finally able to follow his heart into the darkness of the forest. But can Rapunzel trade the shadows of the forest for the castle and be the innocent beauty he remembers?

My Thoughts:
We're all familiar with both the stories of Rapunzel and Snow White but what if the two weren't mutually exclusive? What if the Brothers Grimm got it wrong? In The Fairest of Them All, Turgeon imagines they did and the result is a fairy tale mashup that stays true to the darkness of the original tales while adding a depth they lack in the versions that have been handed down.

The Fairest of Them All is much more than a retelling of fairy tales. Fantasy lovers will enjoy the magic, mystery lovers will find plenty of twists and turns to keep them interested, and those who enjoy action in their books will find bandits, murder and war. But The Fairest of Them All is really the story of three women and the ways love changes them. Turgeon weaves together good and evil, love and loss, obsession and betrayal, and, ultimately, redemption. 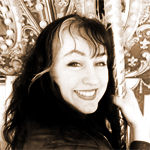 Last year I read and reviewed Turgeon's Mermaid: A Twist On The Classic Tale. I enjoyed it a lot but had some minor quibbles. Fairest retains everything I liked in Mermaid without any of the things that bothers me in it. Turgeon has quickly become my go-to author for modern takes on classic fairy tales. Not only that, I think she may just have convinced me that magic, in a book, can be a good thing!