The Frangipani Hotel by Violet Kupersmith 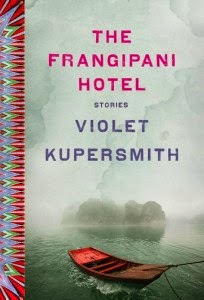 The Frangipani Hotel by Violet Kupersmith
Published April 2014 by Spiegel and Grau
Source: the publisher and TLC Book Tours in exchange for an honest review

Publisher's Summary:
A beautiful young woman appears fully dressed in an overflowing bathtub at the Frangipani Hotel in Hanoi. A jaded teenage girl in Houston befriends an older Vietnamese gentleman she discovers naked behind a dumpster. A trucker in Saigon is asked to drive a dying young man home to his village. A plump Vietnamese-American teenager is sent to her elderly grandmother in Ho Chi Minh City to lose weight, only to be lured out of the house by the wafting aroma of freshly baked bread. In these evocative and always surprising stories, the supernatural coexists with the mundane lives of characters who struggle against the burdens of the past.

Based on traditional Vietnamese folk tales told to Kupersmith by her grandmother, these fantastical, chilling, and thoroughly contemporary stories are a boldly original exploration of Vietnamese culture, addressing both the immigrant experience and the lives of those who remained behind. Lurking in the background of them all is a larger ghost—that of the Vietnam War, whose legacy continues to haunt us.

My Thoughts:
As a person who grew up with the Vietnam War (and it's resulting unrest in the U.S.) as a fact of life, I've always been fascinated by this country and its history. It's no surprise, then, that I jumped at the chance to read this book, even with my spotty record with short story collections.

As with all short story collections I've read, there were uneven place in this collection but, overall, Kupersmith did not disappoint. Vietnamese culture and traditional ghosts and superstitions blend with the more recent ghosts of the Vietnamese war as Kupersmith tells the stories (and often lets her characters tell the stories) of those who live in Vietnam, those who fled the country and those who have returned. To be honest, some of the stories left me wondering if I had missed a deeper meaning, or at least some clue in the story that would have made me understand it better. But I'm a literalist (yes I did just make up a word), less inclined to allow myself to just fall into the fantasy so I'm sure some of that is on me, not Kupersmith.

In the opening Boat Story, where a Grandmother asks if we can ever really escape our past, Kupersmith reminds her readers that we all have our own ghosts even as she begins to introduce readers to a Vietnamese mindset that allows the unbelievable to be the means to explain the unexplainable.

Thanks to the ladies at TLC Book Tours for allowing me to participate in this tour. Kupersmith is a young writer (younger than my oldest!) and I'm looking forward to reading more by her. I'm hoping she'll continue to draw on her own heritage for inspiration; she has a talent for making it come alive on the page. For other opinions about this book, check out the full tour.

Violet Kupersmith was born in rural Pennsylvania in 1989 and grew up outside of Philadelphia. Her father is American and her mother is a former boat refugee from Vietnam. After graduating from Mount Holyoke College she received a yearlong Fulbright Fellowship to teach and research in the Mekong Delta. She is currently at work on her first novel.

Posted by Lisa at 7:29 AM
Email ThisBlogThis!Share to TwitterShare to FacebookShare to Pinterest