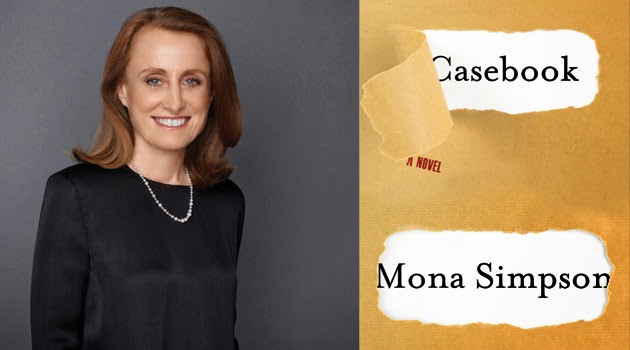 Casebook by Mona Simpson
Published April 2014 by Random House
Source: my copy courtesy of the publisher and TLC Book Tours in exchange for an honest review

Publisher's Summary:
Miles Adler-Hart starts eavesdropping to find out what his mother is planning for his life. When he learns instead that his parents are separating, his investigation deepens, and he enlists his best friend, Hector, to help. Both boys are in thrall to Miles’s unsuspecting mother, Irene, who is “pretty for a mathematician.” They rifle through her dresser drawers, bug her telephone lines, and strip-mine her computer, only to find that all clues lead them to her bedroom, and put them on the trail of a mysterious stranger from Washington, D.C.

Their amateur detective work starts innocently but quickly takes them to the far reaches of adult privacy as they acquire knowledge that will affect the family’s well-being, prosperity, and sanity. Burdened with this powerful information, the boys struggle to deal with the existence of evil and concoct modes of revenge on their villains that are both hilarious and naïve. Eventually, haltingly, they learn to offer animal comfort to those harmed and to create an imaginative path to their own salvation.

My Thoughts:
Let's just get the bad out of the way right off the bat, shall we? The book spans a number of years but I was never sure whether or not I was looking back on those years or traveling through them with Miles. If the later, his "voice" never seemed to change. And the nicknames - Miles calls his mom "the Mims" and his twin sisters "Boop One" and "Boop Two" for reasons that are never made clear to the reader - it started to grate on me that he never once called them by name. I have nicknames for everyone in my house but I don't use them exclusively.

That being said, I really enjoyed this book. It's a quick, easy read but with surprising depth, tenderness and honesty. In the beginning of the book, poor Miles is just a boy trying to find out what's in store for him only to be dropped right into matters that are beyond his comprehension. Matters that the adults never attempt to help him understand. He struggles to lay blame for his parents, first finding fault with one and then the other. He struggles to get a grasp on how everything that is happening will effect him as, once again, things begin happening to Miles and his sisters that no one bothers to explain. Miles is often surprisingly mature, often times much more so than his parents whose selfishness frequently leaves the kids handling things on their own. I can't say how real all of this is, fortunately never having suffered through a divorce in my family, but it feels real. I don't imagine most kids would become spies to get to the bottom of things but Miles reactions to the things that were happening around him certainly felt believable.


"Afraid to get divorced? Was it still possible they wouldn't? I had a queasy feeling: I remembered the boy to whom those words would have fallen like the deepest balm. The gold of recovery. I could almost reach his feelings, but not quite: I was no longer that boy. I wasn't sure I wanted my parents back together. I was used to things the way they were now. I'd already begun to be the man I would become. Halfhearted. About my parents getting back together...And the other side of halfheartedness was greed for experience, even contradicting experiences."

Periodically the writing felt a bit jarring but some of that may have been because I was reading from a galley of the book and not a finished copy. Mostly, though I fell into Simpson's writing, scooping up the gems she had dropped throughout the book... and you know how much I love to find gems in books.


"She looked out the window, mad and proud. A tiny queen."

"More than separation, this seems the end of my good life. She was selling the house that smelled like excitement."

"What was so-called romance? It seemed a lot like friendship, but with a fleck of sparkle. What was that sparkle? Hope, maybe. But hope for what? A better life. Some future."

Any time  in this book that my attention started to wander, Simpson would plop one of the beauties into the story and grab me again. I only hope that all of these made their way into the finished book.

Thanks to Lisa at TLC Book Tours for introducing me to this book...and to Mona Simpson. For other opinions about this book, check out the full tour.

Mona Simpson is the author of Anywhere But Here, The Lost Father, A Regular Guy, Off Keck Road, and My Hollywood. Off Keck Road was a finalist for the PEN/Faulkner Award and won the Heartland Prize of the Chicago Tribune. She has received a Whiting Writer’s Award, a Guggenheim grant, a Lila Wallace-Reader’s Digest Writers’ Award, and, recently an Academy Award from the American Academy of Arts and Letters.
Posted by Lisa at 1:30 AM
Email ThisBlogThis!Share to TwitterShare to FacebookShare to Pinterest