The Reader by Bernard Schlink 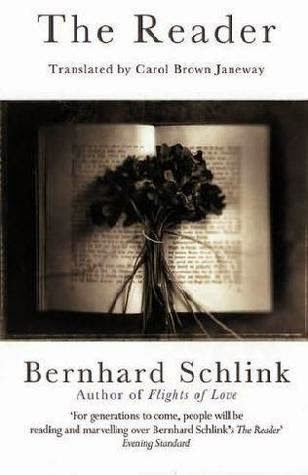 The Reader by Bernard Schlink
Published July 1997 by Knopf DoubledayPublishing Group
Source: my paperbook and audio copy were both purchased
Narrated by Campbell Scott

Publisher's Summary:
Fifteen-year-old Michael Berg becomes ill on the way home from school. A woman takes care of him. Later, the boy arrives at her home with a bunch of flowers to thank her. And then comes back again. Hanna is the first woman he has ever desired. But there is something slightly off-key about her. His questions about her family and her life go unanswered.

One day Hanna simply disappears. Michael's life goes on, but he can't forget her. Years later, as a law student observing a trial in Germany, Michael is shocked to realize that the person in the dock is Hanna. The woman he had loved so passionately is a criminal. Much about her behavior during the trial makes no sense. But then, suddenly and terribly, it does — Hanna is not only obliged to answer for a horrible crime, she is also desperately concealing an even deeper secret. As the past erupts into the present — both Michael's past with Hanna, and the past of Germany itself — Michael must accept that he will never be free of either of them.


My Thoughts:
This book, despite its being little more than 200 pages, has sat on my bookshelf for years, scaring me off because I was certain it would be too heavy. Finally, I picked it up on audio at the library book sale and its length was just the selling ticket when I finally listened to it.

Just 218 pages - there is more packed into this book than there is in many books four times its size and yet it is not intimidating in the least. It is abundantly clear why a 15-year-old boy would fall in love with a woman twice his age and equally as clear why she would allow him to do that. It is really only later, as Michael thinks back on his affair with Hanna that both he and the reader think of the relationship as completely inappropriate and Hanna's actions as, perhaps, criminal. It's only through the lens of her wartime activities, her criminal actions then, that he begins to think of her as someone who has wronged him. Yet she will always occupy a place in his heart, as most first loves do, and he spends the rest of his life measuring all women against her and unable to entirely break ties.

Schlink does not pass judgment on Hanna's Nazi past. Apparently this has bothered some readers. I like a book where the author allows the reader to form their own opinion about the morality of his characters' actions. My thought is that he wanted readers to understand that there is not necessarily a black and white. Of course it was a terrible thing that Hanna was a guard in a concentration camp. But then, she was, when she was first offered the job, a woman looking for a job in a country which was telling her that there was nothing wrong in what she would be doing. The debate among Hanna's fellow defendants further makes it clear that the degree of guilt is not always clear in these situations. Are all parties involved equally guilty, regardless of the degree to which they made decisions? Can one's actions be mitigated by the degree to which they felt they had no choice?

Very little of what I've read of World War II and the Nazis has dealt with the aftermath in Germany. Through Michael, the reader is allowed to ponder the mixed feelings of the Germans after the war and the ways in which the first generation of Germans after the war felt about what their parents had done or not done and how they used that against them. I found it very interesting to consider. Certainly the world couldn't convict every person who was involved in the Nazi party after the war, but there was nothing to stop the German people and their children from punishing them.

In the end, this is much more than the story of a young man's illicit love affair with an older woman and well worth reading.