Station Eleven by Emily St. John Mandel
Published September 2014 by Knopf Doubleday Publishing Group
Source: got this one for a Christmas present

Publisher's Summary:
One snowy night Arthur Leander, a famous actor, has a heart attack onstage during a production of King Lear. Jeevan Chaudhary, a paparazzo-turned-EMT, is in the audience and leaps to his aid. A child actress named Kirsten Raymonde watches in horror as Jeevan performs CPR, pumping Arthur’s chest as the curtain drops, but Arthur is dead. That same night, as Jeevan walks home from the theater, a terrible flu begins to spread. Hospitals are flooded and Jeevan and his brother barricade themselves inside an apartment, watching out the window as cars clog the highways, gunshots ring out, and life disintegrates around them.

Fifteen years later, Kirsten is an actress with the Traveling Symphony. Together, this small troupe moves between the settlements of an altered world, performing Shakespeare and music for scattered communities of survivors. Written on their caravan, and tattooed on Kirsten’s arm is a line from Star Trek: “Because survival is insufficient.” But when they arrive in St. Deborah by the Water, they encounter a violent prophet who digs graves for anyone who dares to leave.

Spanning decades, moving back and forth in time, and vividly depicting life before and after the pandemic, this suspenseful, elegiac novel is rife with beauty. As Arthur falls in and out of love, as Jeevan watches the newscasters say their final good-byes, and as Kirsten finds herself caught in the crosshairs of the prophet, we see the strange twists of fate that connect them all.

My Thoughts:
I have been wanting to read this book since I first learned about it. I have had it on my bookshelf since Christmas. For some reason, I kept putting it off. Oh yeah, I know the reason - dystopian fiction. Dystopian fiction and I have a love/hate relationship. I really, really have to be talked into reading it. Maybe I need to get over that. Because I loved this book.

Maybe because Mandel's focus is not on the horror of the pandemic or its immediate aftermath. In fact, although the pandemic is the pivotal moment of the book, Mandel does not focus on it. It happens quickly and 99% of the world population is annihilated. Jump forward 20 years. There are no zombies, there is no reason crops can't be grown, there are no cannibals to avoid. Which is not to say there is no tension because that prophet? He is not a nice guy. Also, people start disappearing. So it's not entirely without the usual scary post-apocalyptic stuff.

Mandel moves the story back in forth in time, changing the focus from one character to another, although Arthur remains the heart of the story even though he dies before the pandemic starts. Mandel crafts a mystery, leaving clues along the way then gradually reveals how everything is tied together. It was, for me, an impressive balancing act that caught me by surprise at the end. I'm hesitant to tell you more about the book because I feel like it's something you need to have unfold as you read it without knowing too much in advance. 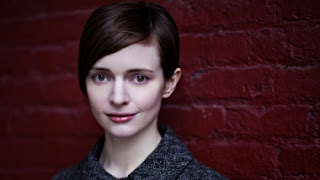 As she has in her previous books, Mandel has crafted interesting characters involved in unusual situations. It was fun to look back at think about the way her previous books have been building up to this work. Station Eleven won the Arthur C. Clarke award and The Morning News Tournament of Books, was a finalist for the National Book Award and the PEN/Faulkner Award, and was on the Bailey's Prize long list as well as numerous Top 10 lists for 2014. It's going to be a tough one to top.
Posted by Lisa at 1:30 AM
Email ThisBlogThis!Share to TwitterShare to FacebookShare to Pinterest