The Library Book by Susan Orlean

The Library Book by Susan Orlean
Published October 2018 by Simon & Schuster
Source: my ecopy courtesy of the publisher, via Netgalley, in exchange for an honest review

Publisher's Summary:
On the morning of April 29, 1986, a fire alarm sounded in the Los Angeles Public Library. As the moments passed, the patrons and staff who had been cleared out of the building realized this was not the usual false alarm. As one fireman recounted later, “Once that first stack got going, it was Goodbye, Charlie.” The fire was disastrous: It reached 2,000 degrees and burned for more than seven hours. By the time it was extinguished, it had consumed 400,000 books and damaged 700,000 more. Investigators descended on the scene, but over thirty years later, the mystery remains: Did someone purposefully set fire to the library—and if so, who?

[Orlean] investigates the legendary Los Angeles Public Library fire to showcase the larger, crucial role that libraries play in our lives. To truly understand what happens behind the stacks, Orlean visits the different departments of the LAPL, encountering an engaging cast of employees and patrons and experiencing alongside them the victories and struggles they face in today’s climate. She also delves into the evolution of libraries across the country and around the world, from a metropolitan charitable initiative to a cornerstone of national identity. She reflects on her childhood experiences in libraries; studies arson and the long history of library fires; attempts to burn a copy of a book herself; and she re-examines the case of Harry Peak, the blond-haired actor long suspected of setting fire to the library over thirty years ago. Along the way, she reveals how these buildings provide much more than just books—and that they are needed now more than ever.

My Thoughts:
In April, Entertainment Weekly said “Susan Orlean’s next book will be a passionate love letter to libraries.” Indeed it is. 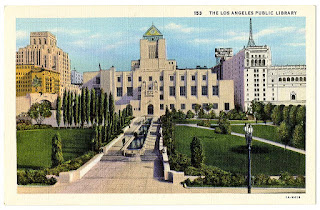 Orlean grew up with a love of her mother and her weekly trips to the library.


"Together we waited for the librarian at the counter to pull the date card out and stamp it with the checkout machine - that loud chunk-chunk, like a giant fist of time thumping the card, printing a crooked due date underneath a score of previous crooked due dates that belonged to other people, other times.
Our visits to the library were never long enough for me. The place was so bountiful. I loved wandering around the bookshelves, scanning the spines until something happened to catch my eye. Those visits were dreamy, frictionless interludes that promised I would leave richer than I arrived."

But, like so many of us, as she got older, she stopped going to the library. She had a burning (no pun intended) desire to own books, not just read them and give them back. "I wanted to have my books around me, forming a totem pole of narratives I'd visited." When her son was young, though, she found herself rediscovering libraries when she began taking him to them; and when she learned about the fire at Los Angeles' Central Library her love of libraries and her investigative journalism career made the perfect match. 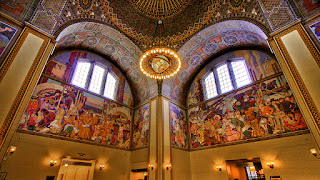 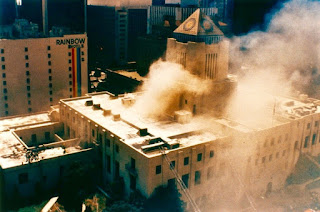 There is nothing dull or dry about this book. Orlean's writing is vivid, bringing history to life.


"Usually, a fire is red and orange and yellow and black. The fire in the library was colorless. You could look right through it, as if it were a sheet of glass. Where the flame had any color, it was pale blue. It was so hot that it appeared icy."

"In the building, the air began to quiver with radiant heat. Crews trying to make their way into the stacks felt like they were hitting a barricade, as if the heat had become solid. "We could only stand it for ten, fifteen seconds," one of them told me...The temperature reached 2000 degrees. Then it rose to 2500. The firefighters began to worry about a flashover, a dreaded situation during a fire in which everything in a closed space - even smoke - becomes so hot that it reaches a point of spontaneous ignition, causing a complete and consuming eruption of fire from every service."

Did you know that fire could be colorless, that it could become so hot it cause spontaneous ignition, and have you heard of a stoichiometric condition (when a fire achieves the perfect burning ratio of oxygen to fuel)? I'm sure I would not have believed I could be so interested in reading about fire.

Although, The Library Book is never heavy handed, Orleans touches on the ways libraries have had to deal with homelessness, immigration, and politics in order to remain relevant and to achieve their missions. Reading this book is about learning about so much more than just one fire in one library. Through it all, though, books remain at the heart of any library and their value is beyond measure.


"Book are a sort of cultural DNA, the code for who, as a society, we are, and what we know. All the wonders and failures, all the champions and villains, all the legends and ideas and revelations of a culture last forever in its books. Destroying those books is a way of saying that the culture itself no longer exists; its history has disappeared; the continuity between it's past and its future is ruptured."

This book makes me happy that I'm again a card carrying library patron.