April in Spain by John Banville 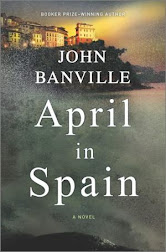 On the idyllic coast of San Sebastian, Spain, Dublin pathologist Quirke is struggling to relax, despite the beaches, cafés and the company of his disarmingly lovely wife. When he glimpses a familiar face in the twilight at Las Acadas bar, it's hard at first to tell whether his imagination is just running away with him.

Because this young woman can't be April Latimer. She was murdered by her brother, years ago—the conclusion to an unspeakable scandal that shook one of Ireland's foremost political dynasties.

Unable to ignore his instincts, Quirke makes a call back home to Ireland and soon Detective St. John Strafford is dispatched to Spain. But he's not the only one en route. A relentless hit man is on the hunt for his latest prey, and the next victim might be Quirke himself.

My Thoughts:
I've long been meaning to ready something by John Banville (his name is always popping up on lists of great authors). So I didn't even read what this book is about before I reserved it at the library and, no surprise, I didn't read the summary before I jumped in. Even though I knew nothing about the book and should have been ready for anything, I was still surprised to read this opening:

"Terry Tice liked killing people. It was as simple as that. Maybe "liked" wasn't the right word. Nowadays he was paid to do it, and well paid. But money was never the motive, not really."

Woah now. What kind of book have I picked up? As it turns out, quite a good one, filled with truly interesting and unusual characters, a lot of darkness, and a little humor starting with the play on words in the title. There are a number of storylines going on at the same time here, which flit in and out of each other, not coming fully together until nearly the end of the book which isn't, as it so often, distracting, but instead pulls readers through the book. As good as the story is, it's Banville's writing that really made this book work for me, as in this passage where the always cranky Quirke is complaining about vacationing:

"The conspiracy begins the moment you arrive, as he pointed out to Evelyn, who was knitting, and wasn't listening. There's the grinning doorman who yanks open the door of your taxi and gabbles a greeting in pidgin English. There's the beaming girl in black behind the reception desk who exclaims, in her bouncy way, that it is a pleasure to welcome you back, even though you've never stayed here before. There is the porter, lean and stopped, with a melancholy eye and a mustache that might have been drawn on with an eyebrow pencil, who festoons himself with your suitcases and staggers away with them, to arrive at the door of your room a mysterious twenty minutes later - was he off in some cubbyhole in the meantime, going through your things? - and, having shown you how the light switches work anyhow to open and close the curtains, loiters expectantly on the threshold, with his fake, ingratiating smile, waiting for his tip."

Doesn't that draw a vivid picture even as it tells you so much about who Quirke is? Another vivid picture, one that might feel excessive in a such a slim novel but doesn't.

"His keenest, secret enthusiasm was the lift. It ran, or joggled, rather, up and down through the very heart of the building. It was ancient and creaky, with a folding iron gate that shuddered shut with a satisfying clatter. Inside, it was lined with red plush, and attached to the back wall, below a framed mirror, was a little wooden seat hardly deeper than a bookshelf, covered with a raggedy piece of carpet held in place by round-headed nails worn to a shine over the years by the well-upholstered posteriors of countless well-heeled guests."

Throughout the book Banville reveals things that appear to indicate that this is not the first book that features Quirke, that there may be things that first time readers don't know. But the book is so well done that it comes off feeling more like Banville has just dropped readers into a life and you're going to have to accept that there will be some things that you don't know about the characters and their pasts. It was only after I finished the book that I found out that Banville has written a number of books featuring Quirke. So now I need to find more books by Banville and books about Quirke.
Posted by Lisa at 1:30 AM
Email ThisBlogThis!Share to TwitterShare to FacebookShare to Pinterest
Labels: book review, Ireland, library, mystery/thriller, Spain