The Mockingbird Next Door: Life With Harper Lee by Marja Mills 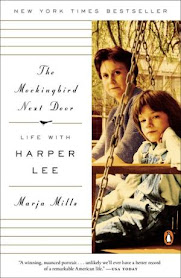 The Mockingbird Next Door: Life With Harper Lee by Marja Mills
Read by Amy Lynn Stewart
8 hours 11 minutes
Published July 2014 by The Penguin Press
Publisher's Summary:
To Kill a Mockingbird by Harper Lee is one of the best loved novels of the twentieth century. But for the last fifty years, the novel’s celebrated author, Harper Lee, has said almost nothing on the record. Journalists have trekked to her hometown of Monroeville, Alabama, where Harper Lee, known to her friends as Nelle, has lived with her sister, Alice, for decades, trying and failing to get an interview with the author. But in 2001, the Lee sisters opened their door to Chicago Tribune journalist Marja Mills. It was the beginning of a long conversation—and a great friendship.

In 2004, with the Lees’ blessing, Mills moved into the house next door to the sisters. She spent the next eighteen months there, sharing coffee at McDonalds and trips to the Laundromat with Nelle, feeding the ducks and going out for catfish supper with the sisters, and exploring all over lower Alabama with the Lees’ inner circle of friends.

Nelle shared her love of history, literature, and the Southern way of life with Mills, as well as her keen sense of how journalism should be practiced. As the sisters decided to let Mills tell their story, Nelle helped make sure she was getting the story—and the South—right. Alice, the keeper of the Lee family history, shared the stories of their family.

The Mockingbird Next Door is the story of Mills’s friendship with the Lee sisters. It is a testament to the great intelligence, sharp wit, and tremendous storytelling power of these two women, especially that of Nelle.

Mills was given a rare opportunity to know Nelle Harper Lee, to be part of the Lees’ life in Alabama, and to hear them reflect on their upbringing, their corner of the Deep South, how To Kill a Mockingbird affected their lives, and why Nelle Harper Lee chose to never write another novel.

My Thoughts:
I'm more than a little embarrassed to admit that I was sent this book in 2014 for review. I really, really wanted to read it then and was so excited to offered a copy. But I didn't have time when it arrived to read it so it went on the bookshelves where, as you may know, books go to die. I saw a meme today that read: "I haven't read the book, but I own a copy." So me. When I saw that my library had the audiobook, I knew it was time. Lest the publisher think I never even picked up the book that they had so kindly sent me, I made this one a read/listen combination.
The year after this book was published, Harper Lee's original work, Go Set A Watchman, was published, with much controversy. A year later, Lee died. Three years later, I read Hillary Huber's Furious Hours: Murder, Fraud and the Last Trial of Harper Lee. Everyone of those events gave me new perspectives about Harper Lee and made reading this book now a completely different experience than it would have been had I read it eight years ago.
The truth of the matter is that Alice opened her door to Mills; gradually Nelle came around to trust Mills as well. They were instrumental in getting the house next door for Mills when Mills needed to take a break from her reporting work. By this time, Mills was already "in" with the sisters and loved life in Monroeville. As a person with chronic disease, Mills lived a slower life that fit in perfectly with the Lee sisters' inner circle of elderly people. She became an important part of their group and incredibly close to the Lee sisters.
The Washington Post review said that this book might have become "sycophantic" but didn't. True enough. But it can also hardly be said that Mills was entirely objective. She clearly adored these people and I can't imagine that she would have had it in her to disparage them. She doesn't entirely let Nelle off the hook, which made it all the easier for me to believe the rest of what she wrote about her. Having read those other works, I won't have been able to believe that she was just an eccentric old woman. Although she was that.
This book makes Nelle Harper Lee human. She was a devoted sister, a woman who was lucky enough to have earned enough money to allow her to live life in a way that brought her pleasure, and, if you were lucky enough to be in her inner circle, someone that would have been fun to know. But she was also a woman who, once To Kill A Mockingbird was popular, could never fully live life entirely on her own terms.
I'm sorry to the publisher for putting reading this book off for so long. But I'm glad that I read it after I'd read the other two works, which gave me enough background on Lee to make this feel like I was getting a finishing picture of her. The Mockingbird Next Door earned acclaim when it was published and deservedly so.
Posted by Lisa at 1:30 AM
Email ThisBlogThis!Share to TwitterShare to FacebookShare to Pinterest
Labels: audiobook, biography, book review, library, nonfiction