The Children On The Hill by Jennifer McMahon 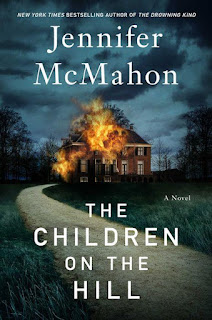 The Children On The Hill by Jennifer McMahon
352 pages
Published April 2022 by Gallery/Scout Press
Source: my copy courtesy of the publisher, through Netgalley, in exchange for an honest review
Publisher's Summary:
1978: At her renowned treatment center in picturesque Vermont, the brilliant psychiatrist, Dr. Helen Hildreth, is acclaimed for her compassionate work with the mentally ill. But when she’s home with her cherished grandchildren, Vi and Eric, she’s just Gran—teaching them how to take care of their pets, preparing them home-cooked meals, providing them with care and attention and love.

Then one day Gran brings home a child to stay with the family. Iris—silent, hollow-eyed, skittish, and feral—does not behave like a normal girl.

Still, Violet is thrilled to have a new playmate. She and Eric invite Iris to join their Monster Club, where they catalogue all kinds of monsters and dream up ways to defeat them. Before long, Iris begins to come out of her shell. She and Vi and Eric do everything together: ride their bicycles, go to the drive-in, meet at their clubhouse in secret to hunt monsters. Because, as Vi explains, monsters are everywhere.

2019: Lizzy Shelley, the host of the popular podcast Monsters Among Us, is traveling to Vermont, where a young girl has been abducted, and a monster sighting has the town in an uproar. She’s determined to hunt it down, because Lizzy knows better than anyone that monsters are real—and one of them is her very own sister.

My Thoughts:
In 1818, Mary Shelley wrote Frankenstein; or, the Modern Prometheus, essentially creating a new genre and making her readers rethink what the word "monster" really means. This year, Jennifer McMahon, who always manages to keep me on the edge of my seat and is one of the only horror writers I will read, puts her own spin on that idea.
In The Children On The Hill, we're introduced to Lizzy Shelley, a modern day monster hunter, the kind you'd find in shows on the Travel channel. She doesn't entirely believe in the kind of monsters that she's hunting but she does believe in monsters because she's seen them in action. As we meet her, Lizzy is off on another chase to research a legendary monster who her sister may be using as the foil for her own monstrous acts.
Throughout the book, we move back and forth in time, between the children's search for the truth about Iris's past and Lizzy's search for her sister. McMahon also weaves in pieces from the children's Book of Monsters, excerpts from a book called The True Story of the Hillside Inn, and the voice of the monster, herself. Throughout, McMahon keeps building the tension, as she slowly reveals the truth about what happened in 1978 and the truth about the monster. All of it builds to first one big surprise and then a final twist I never saw coming. I know, I know, you're thinking that it's not the least bit unusual for me not to see the twists coming. But I promise you that you won't see that final one coming, either.
It's been a long time since I've read one of McMahon's books, although I've been meaning to pick them up again for years. This book did not disappoint and has been more eager than ever to pick up more of McMahon's books. They are just the kind of horror stories I can handle - loads of tension but not a lot of gore and always plenty to make readers think. But even if you're not a wimp like I am, I think you'll enjoy this one.
Posted by Lisa at 1:30 AM
Email ThisBlogThis!Share to TwitterShare to FacebookShare to Pinterest
Labels: book review, horror, literary fiction/mystery, netgalley