Publisher's Summary:
When shy young heir Patrick is orphaned at the tender age of ten, the only family he has is his wealthy and eccentric aunt, a fabulous New York socialite named Mame. While prone to dramatic costumes, flights of fancy and expensive whims - not least her lives as a muse and a Southern belle - Auntie Mame will raise Patrick the only way she knows how: with madcap humour, mishaps, unforgettable friends and lots and lots of love.


My Thoughts:
The movie adaptation of this book has long been one of my favorite movies but the book has been sitting on my virtual Nook book shelf for several years. Despite encouragement from a fellow blogger, I just couldn't imagine Dennis' Mame could live up to Rosalind Russell's interpretation. Oh, but she does! In fact, Mame actually becomes even more three-dimensional through the stories in this book where we see her desire for love and need to feel young even more clearly.

Even though the time period the book is set in is very clear (beginning as it does in the 1920's), there is a timelessness to it that makes it every bit as readable now as it was when it was published. It's inconceivable that 19 publisher's turned down this story before it was finally published. Was it the political side of some of the chapters that scared them off or Dennis' stance on bigotry, racism, religion, and sexuality, topics that were taboo for popular literature of the time? Mame and Patrick talk about her queer friends on Fire Island, Mame stands up for Jewish friends, and Dennis makes his views about the treatment of blacks by the old guard of the South very clear.

Want some examples of what makes this book stand the test of time? How about this:


""You sit and talk like the New Republic or some parlor pink when another christian faces a serious..."
" I wish you wouldn't use the term Christian where it is so obviously misapplied," Auntie Mame said steadily."


"At seven o'clock another couple, named Abbot or Cabot or Mabbit - I never learned just which - joined us. He was in banking and she was in Planned Parenthood."

I had to stop reading and go find out exactly when Planned Parenthood was founded - turns out it was 1916. I also had to look up to see just when Fire Island began to be known as a party place for gay men since Patrick says to Mame at one point "They don't have to know about all your queer friends on Fire Island..." That, as it turns out, was around 1938. God love Mame who replied to Patrick:'
"Should they know that I think you've turned into one of the most beastly, bourgeois, babbity little snobs on the Eastern Seaboard, or will you be able to make that quite clear without any help from me?"

After reading the book, I have an new appreciation for the way the movie screenwriters kept so much of the dialogue and exact story lines from the book. I will say that I did prefer Pegeen, the woman Patrick marries, in the movie simply from the standpoint that she is more understanding of Mame. On the other hand, the way her character is written in the book gives Dennis another shot at the terrible way the upper class treated the working class.

There has never been, I don't think, a character quite like Auntie Mame in literature. If you haven't read the book, I highly recommend it, especially if you are a fan of the movie. Even though, after reading the book, I think Russell was a little old to play Mame, she simply is Mame. 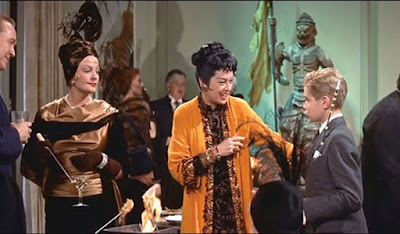