I must first admit that I have never read Anna Karenina so I can't speak to how well it has been adapted by Tom Stoppard and Joe Wright's in the 2012 adaptation of Leo Tolstoy's book. On the other hand, I feel confident you have never seen an adaptation like this before. Much of the action takes place in an empty theater - the floor, the stage, the balconies, the backstage area - that often blends into traditional sets. I found it a bit disconcerting in the beginning; but, as I got used to it, I came to like the idea.

One reviewer compared it to Baz Luhrmann. Visually, I'd agree - it's lush and vivid. The costumes and use of color are amazing. There was something about it that also reminded me of Wes Anderson's films, particularly early on. I was surprised to find so much humor and lightness in the early going and I began to think that Wright might have reimagined Tolstoy's masterpiece as a comedy. Have no fear. Anna will die in the end and Wright will have shown us all of the ways love can play out, just as Tolstoy imagined them. It's not an adaptation for purists and it certainly has it's flaws. But, in the end, I enjoyed it. 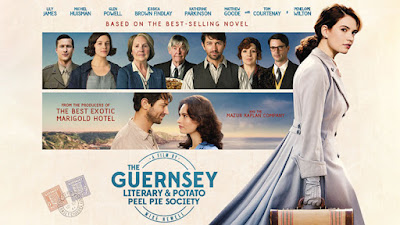 The Guernsey Literary and Potato Peel Society, on the other hand, is a book I have read and enjoyed very much. It was also a book I felt certain would, at some point, be made into a movie. But it's been a long time since I've read the book so it's hard to me to say how true it was to the book.

Doing that would have been tough - it is an epistolary novel, after all; you can't do an entire movie through letters. But those letters were part of what I enjoyed about the book and I missed that in the movie. I recall the book having a much greater sense of tension than does the movie.  In looking back on the occupation of the island by the Germans, somehow director Mike Newell has made it seem more of an inconvenience than a seriously dangerous time.

But...it has the charming appeal of an old-fashioned romance movie with lovely settings, some very good performances, and enough of the book to satisfy those who loved it. It was sweet and predictable, which was just what I'd imagine almost everyone who watches it will want form it. 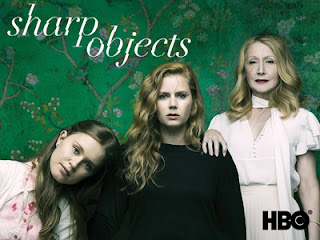 That tension lacking in Guernsey? Sharp Objects has it in spades. I watched the second episode by myself as it began to get dark and almost had to shut it off. The book is exceedingly dark. The HBO adaptation may well beat it, even with much of the action set in the bright light of day. The murders that are the background of the movie are not the only reasons it's all so hard to watch. Visually, it jumps around quite a lot - it demands you pay attention. Amy Adams is incredible - she's so deep into it that she has declined to do a second season because she can't live in that character another season. Patricia Clarkson is equally impressive. I'm as knocked out by how well the book as been adapted, at least in the first five episodes. I'd say I can't wait for the final three episodes but I must admit that I'm also a little fearful.

If you haven't already read Gillian Flynn's book, on which this series is based, be aware that this series is loaded with triggers, including cutting, rape, alcoholism, murder, psychological abuse, and a lot of talk about incest and pedophilia. This is not a book nor a series for everyone.
Posted by Lisa at 1:30 AM