Ruth Rabinowitz believes so much in her daughter, Bethany, that she uprooted the two of them from their Seattle home to come to Hollywood because a traveling agent, Mimi Rogers, has told them that Bethany has talent. Hugh Rabinowitz, dentist and long-suffering husband, has stayed behind to earn enough money to keep paying for all of the things that Mimi insists Bethany needs--Invisilign braces, chemical hair straightening, weekly acting classes, professional head shots.

In Hollywood, Bethany and Ruth meet Mimi's other clients: Quinn Reilly, who was kicked out of the house by his mother and step-father, although not without funding; beautiful Allison Addison, who alcoholic mother was only too happy to have Allison move in with Mimi so that she wouldn't have to worry about Allison's new stepfather being attracted to Allison; and Laurel Buehl, daughter of a mother and father who are more than willing to give her whatever she wants. Along the way, Ruth and Bethany meet other parents and children longing for stardom, talent agents, coaches, directors and teachers. It doesn't take long to see that most of these people have their own careers as a priority, without much care of thought of what happens to these kids--at least it's obvious to everyone except, perhaps, Ruth, who is so far out of her element she has to rely on Bethany as much as herself.

When I was approached about reviewing this book, I jumped at the chance to read it without having any idea what it was about. I had read, and thoroughly enjoyed Hammond's "Hannah's Dream" and was eager to read more by her. That one had a really unique story line and some unforgettable characters and I was hoping for the same from this one. Unfortunately, the story of someone coming to Hollywood, hoping to make it big and finding out just how difficult it can be is not a new one. While Hammond does manage to tell the story from a somewhat different point of view (the child actors'), there are many of the same elements that you find in other versions of the story. Also, there are so many characters in the book that it's often difficult to keep some of them straight and harder yet to really become connected to most of them. I often wanted to slap Ruth and tell her to get with it, but, in the end, Hammond kind of did that for me and I enjoyed watching Ruth grow as a person.

Hammond does do a good job of bringing other issues into the story that have nothing to do with the Hollywood life and her writing style is, once again, a pleasure. She has clearly done her research for this book. If you ever had any notion of trying to push your child into acting, this book would make a great tutorial on how the world of Hollywood works. Hopefully Hammond has also left you, as she did me, with the impression that the price to pay for "making it" is simply too great. 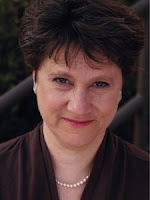 In addition to "Seeing Stars" and "Hannah's Dream," Diane Hammond is also the author of "Homesick Creek" and "Going to Bend." You can read more about Diane and her books at her web site. I loved reading about what it took to get her through her first book tour--it's just the way I think I'd be! Thanks to Trish, and TLC Book Tours for including me in this book tour.

Other stops on this tour are: