What a beautiful day it's shaping up to be here! And the forecast calls for temps in the 70's by the end of the week so I see reading on the patio in my very near future.

Well, this is embarrassing--I don't know how many Sunday Salons I've posted here but only yesterday did I finally realize that The Sunday Salon was an actual compilation of bloggers with actual rules and a web site. Sadly, I'm two months too late to officially become a part of The Sunday Salon; I hope they won't mind that I've been using their badge for all of this time. Once upon a time, I was a bit of a rebel; lately I'm much more of a rule follower. But I like doing Sunday Salons so I'm going to keep doing them whether or not I'm officially "in." Because that's just how wild I am these days! 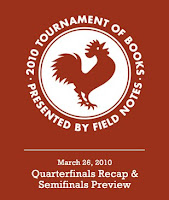 Have you been following the 2010 Tournament of Books? Sixteen books started the tournament; this week it's down to the semi-finals and the zombie round (you'll have to check out the site to understand how that works!). A week from tomorrow, the winner will be announced. It's fun to see who wins each day and the commentaries are terrific.

Last night the family and I finally watched The Blind Side. I know it was manipulative; I know it was overdone. But I loved it--I laughed, I teared up, I cheered. I don't know if Sandra Bullock turned in the best actress performance of the year but she did do a terrific job. I can't wait to read the book, by Michael Lewis, that it was based on.

It's no secret that I love sports so I'm sure it will come as no surprise to read that I've been watching a lot of the NCAA Basketball Tournaments, both the men's (which I am watching purely for the love of the game and to cheer on the 7 or 8 Big 12 teams that made it to the dance) and the women's (which I'm watching because the Nebraska women's team, 32-1, are hoping to get a shot at knocking off the UConn Huskies). Seth Davis, who you may be familiar with if you're a listener of NPR, is the author of a book titled "When March Went Mad." It's the story of how the tournament was changed by the final game of the 1979 season which pitted two of the greatest players ever to play the game--Larry Bird of Indiana State University and Earvin "Magic" Johnson of Michigan State. It was the most watched basketball game in history and changed the way we watch college and professional basketball. 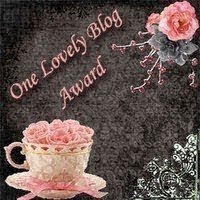 Thanks to Deb of The Book Nook for awarding me the One Lovely Blog Award! The rules say that I'm supposed to pass this award on to 15 blogs that I've recently found but you can see that I'm feeling a little rebellious today. So, as I've been doing lately, I'm going to take this chance to introduce you to the blogger that passed this along to me. Deb lives in New Jersey; in addition to reading, Deb is interested in photography and music. She's reading Elise Blackwell's AN UNFINISHED SCORE, which I reviewed last week and recently reviewed Sarah Addison Allen's GARDEN SPELLS (I just reviewed Allen's THE GIRL WHO CHASED THE MOON). Be sure to stop by and say "hello" to Deb!

Enjoy your week!
Posted by Lisa at 10:20 AM
Email ThisBlogThis!Share to TwitterShare to FacebookShare to Pinterest
Labels: Sunday Salon