Bully for you, Charles Dickens! You've got this thing going now and things are really starting to get interesting. Poor Esther has suffered from what must be small pox, and survived, although scarred. Poor Richard has done lost his mind to the Jarndyce and Jarndyce case. And poor Lady D has had to make the greatest sacrifice.

What I Liked This Week:
This quote about the lawyer, Tulkinghorn, who's been really aggravating the group reading along:


"Has he so little pity of compunction?"
"He has none, and no anger. He is indifferent to everything but his calling. His calling is the acquisition of secrets, and the holding possession of such power as they give him, with no sharer or opponent in it." 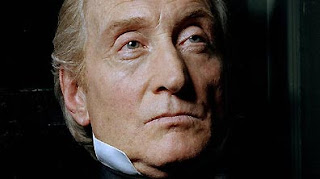 Tulkinghorn was played to perfection in the 2005 BBC production of "Bleak House." Doesn't this guy look just as cold as that description?

What I Didn't Like This Week:
Yes there was another new character this week but now that I've gotten to the point in this book where things are finally starting to happen, I was frustrated to find a long bit that didn't seem to progress the story at all. Couldn't Dickens have just said "and Caddy lived happily ever after?"
Posted by Lisa at 10:57 PM
Email ThisBlogThis!Share to TwitterShare to FacebookShare to Pinterest
Labels: book review, classic, readalong