The Descent of Man - A.K.A. The Missing Book 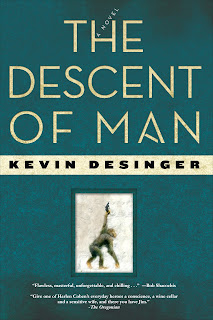 The Descent of Man by Kevin Desinger, which you might know as the book that was on my desk and then magically disappeared, is being released this month in paperback by Unbridled Books. Now you all know how much I love Unbridled Books so you can imagine how disappointed I am to have misplaced this book. Thankfully, Caitlin, from Unbridled Books, has kindly sent me an excerpt from the book to share with you until I finally find my copy.

One night Jim, a quiet wine steward, wakes to find two men trying to steal his car. Against the petitions of his wife, he goes outside to get the plate number of the thieves’ truck. Instead, something comes over him and he drives away in their truck until he recovers his wits and realizes what he’s done.  When Jim learns that the two would-be thieves are brothers with a history of violence, he soon finds himself over his head in a mire of sinister events and must risk everything to regain what he can of his life before that night.

A truck with its lights out idled in the street. White steam pulsed from the tailpipe and
drifted off, but the truck made no sound. From our bedroom window I could make out the
motionless shapes of two men on either side of the truck, facing each other. They both
turned toward our house, but I was able to step back before they looked up to the second
floor, where I stood in the dark. I recalled having been awakened by a clank like you hear
from a distant game of horseshoes, but not why it had drawn me to the window. Marla
slept on, but she can sleep through anything.

When I peered out again, both figures were standing together on the near side
of the truck. They were studying our car. Even after I realized that the sound had come
from a piece of steel striking the pavement, an element of disbelief kept me from piecing
together what was happening. My sleepy forty-year-old brain plodded through the stages
of cognizance, from seeing to understanding. In college philosophy I had learned the
difference between immediate and mediate perception. Immediate: two guys. Mediate:
I recognize them as two guys. The first is simply the mechanism of my eyes discerning
shapes in the visual field; the second is my brain making sense of the shapes. Both stages
happen at the speed of thought—the first perhaps even faster because it happens before
thinking interferes. Either I’d skipped the next class or we hadn’t covered a third stage of
perception (maybe making sense of the action), but it took what seemed like forever: Two
guys are stealing our car. The fourth stage, let’s call it self-awareness, quickly followed:
I’m standing here like an idiot watching two guys steal our car.

I pulled on a pair of jeans, a work shirt, and my running shoes. Almost as an
afterthought I woke Marla. There was enough light for me to see her sit up and rub her
eyes like a little girl.

I grabbed the handset of our cordless phone from the nightstand and pushed it into
her hands. “Call the cops! Two guys are stealing our car.”

She reached for her bedside lamp. I said, “No light!”

Now fully wakened by the urgency in my tone, she forced the phone back on
me. “You call the cops.” Then, “Why are you dressed?”

“I’m going outside to get the plate number of their truck.”

“I want to make sure we get these guys.”

She had a point, but I gave her the phone again. “If the cops get here in time there
won’t be anything to worry about.” I felt around in my nightstand drawer for the notepad
and pencil I keep there and slid them into my shirt pocket. Then I said, “Keep away from
the window.”

As I slipped out the back door my hands felt strangely empty, so I detoured
to grab a two-foot length of old galvanized pipe from a pile of plumbing scrap I kept
meaning to recycle. The pipe made me feel safer, but I also felt an unfamiliar anger. This
was a new experience for me, even in our modest neighborhood, where rashes of breakins
occurred now and then but were quickly stopped, and where our middle-aged Camry
was about the nicest car on the block. The pipe felt natural in my fist.

Our neighbors to the left are tidy people who don’t own a dog, and I was able
to find my way easily and quietly across their backyard and around the far side of their
house to the street. There’s a streetlight two houses down on the near-side parking strip
and another farther up the block; otherwise it’s porch lights. I started across the street,
glancing toward the two guys breaking into our car. They had their backs to me.

Keeping behind the parked cars, I worked my way toward the idling truck. I could
see through the windows of the cars, but not well enough to read the plate number. The
truck—which I could hear now, its engine’s deep, covert burble—had both doors open a
foot or so, maybe to provide a quick exit if the thieves had to abort. One of them was in
the driver’s seat of our Camry, and the other was leaning over the half-open door. I kept
moving up the sidewalk until the truck was between them and me. As I crouched down,
gripping the corroded pipe, my anger grew as if it were being released at a molecular
level into my hand. It spread up my arm and shoulder and concentrated in my chest.

Something in the Camry broke with a loud snap, and one of the car thieves swore.
At the same time something in me snapped too. Without thinking I crossed the few feet
of open street and slipped into the cab of the truck. I placed the pipe on the passenger
seat, pulled the shifter into “drive,” and hit the gas. The truck lurched up Juniper. I
couldn’t bring myself to look anywhere but the street ahead. I shut my door, then made
the long reach across the bench seat to close the passenger door. Keeping my eyes on the
road, I felt around on the dashboard for the headlights switch and pulled it on. The cab
smelled like a riverside tavern: cigarettes, sweat, mildew, and beer.

A rising sound of sirens triggered a tightness in my chest, as if the cops were after
me instead of the car thieves. I pulled on the seatbelt shoulder strap and tried to keep
calm, to drive as if this were my truck. My arms were shaking, and the tightness spread to
my stomach. Flashing blue and white lights came into view, and a cop car rushed past me
faster than I’d ever seen a car travel on a residential street.

The light at Fulton let me into heavier traffic heading west toward the river. I
didn’t want to cross the bridge into downtown, so I took a side road near the railroad yard
and eventually entered an unfamiliar industrial area. It was randomly lit in yellow and
brown tints, deserted as the moon. Half a mile later I realized what had happened: I had
taken a vehicle from two car thieves at the same time that they were trying to take ours! I
couldn’t decide whether it was irony, poetic justice, or just dumb luck.

I slowed alongside a stretch of hurricane fencing with railroad tracks on the other
side and found myself laughing convulsively. The only thing that kept me from choking
on this strangely gripping laughter was when I finally thought about the cops talking to
Marla, working their way around to a question that should have occurred to me earlier:

And where is your husband now?
Posted by Lisa at 12:19 AM
Email ThisBlogThis!Share to TwitterShare to FacebookShare to Pinterest
Labels: book excerpt, Unbridled Books