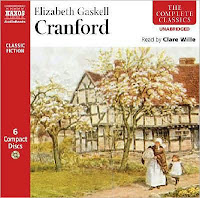 Cranford by Elizabeth Gaskell
Originally published in installments between 1851 to 1853
Read by: Clare Wille
Source: my audiobook purchased at my local library book sale

Summary (Amazon):
Cranford depicts the lives and preoccupations of the inhabitants of a small village - their petty snobberies and appetite for gossip, and their loyal support for each other in times of need. The village is dominated by women, from the kindly spinster Miss Matty, living in genteel poverty with her redoubtable sister, to Lady Glenmire, who shocks everyone by marrying the doctor. When men do appear, such as 'modern' Captain Brown or Matty's suitor from the past, they bring disruption and excitement to the everyday life of Cranford.

My Thoughts:
For the love of Pete (whoever that may be), why in the world did I wait so long to discover Elizabeth Gaskell?

Cranford reminded me so much of two of my favorite authors, Jane Austen and Charles Dickens, in the way that Gaskell skewers society and mores. But, readers, Gaskell is ever so much more approachable. Where Dickens can romp off into political statements and Austen can describe the countryside for pages, Gaskell pares it down to the essentials in Cranford. Make no mistake, nothing is lost in this method. The town of Cranford and its denizens are vividly portrayed. It's easy to picture the gently worn carpets and gowns, the small rooms in the cozy homes.  More importantly, these ladies became real, their pettinesses, their loyalty, their sins of pride. Cranford is charming and sweet and, undoubtedly, my gateway to more Gaskell.

I must say, this is clearly a ladies' book. The men in the story, while they often play key pieces in the lives of the Cranford women, their roles are small and generally brief. I'd put this book into any woman's hands, but I'd be hesitant to recommend it to any of the men in my life.

I highly recommend the audiobook version; Clare Wille is marvelous. The emotions of the novel were palpable in her capable hands. I truly felt as though Miss Mary Smith were telling me about her visits to the town of Cranford.
Posted by Lisa at 1:30 AM
Email ThisBlogThis!Share to TwitterShare to FacebookShare to Pinterest
Labels: book review, classic, England, The Classics Club