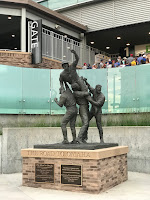 I thought it might be fun to look back at some of my older posts. Or it might be painful. Either way, here's one from June 2009, when I first talked about the College World Series:

It's good to be in Omaha this week if you're a fan of college baseball as Rosenblatt Stadium is playing host to the College World Series. We love playing host to the thousands of fans that travel here from all over the country in support of their favorite team and usually buy up the rest of the tickets to ensure a full stadium for most games, adopting a new favorite team each year.

Last night's game between Virginia and Arkansas was a big fan favorite--Dave Van Horn, coach of the Arkansas Razorbacks, used to coach at the University of Nebraska and Brian O'Connor, coach of the Virginia Cavaliers, used to play ball at Creighton University which is located in Omaha. The game was what the series is all about. Arkansas was down to their last out and behind by two runs and it looked like they were headed home. Then they managed to tie up the game with a two-run home run and hold the Cavs to take the game to extra innings--three extra innings to be exact. Twice Virginia had the bases loaded but could not score and in the top of the 12th inning the Razorbacks were able to score the game winning run. You couldn't help but cheer for the Razorbacks even as your heart broke for the Cavaliers. On to the next game--play ball!

UPDATE:
The College World Series has since moved to a new stadium, just north of downtown Omaha. Instead of parking in the yards of all of the small homes near Rosenblatt Stadium, there are now parking lots nearby. Otherwise, much of what made the event such a fan favorite has been transplanted to the new digs - food vendors, dozens of baseball clothing vendors, and concerts. They've even kept a few pieces of Rosenblatt Stadium around, including that statue.

That's a different picture than the one I originally posted, which was at the old stadium. It's already hard to remember what it was like to be at the old stadium. The other night when we were at a game, The Big Guy and I both remarked on how much better than new facility is, how much more they are able to set up for fans to do around the stadium, how many more eating and drinking establishments are within walking distance, and how much easier it is to explore Omaha from this location.

There's not really an underdog here this year, no team that I think the locals are really embracing. Except, maybe, for Dave Van Horn's Razorbacks, who are back again this year. They are also known as the Omahogs, so you know we have to love that!

No matter where in Omaha the Series is played, it's still the Greatest Game On Dirt and Omaha still loves playing hosts to the thousands of fans that come to town to watch some great baseball and some of the players we'll be watching in the major leagues in the future.