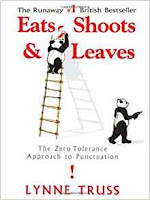 Eats, Shoots and Leave: The Zero Tolerance Approach to Punctuation by Lynne Truss
Published 2004 by Avery
Source: bought this one through Better World Books

Publisher's Summary:
We all know the basics of punctuation. Or do we? A look at most neighborhood signage tells a different story. Through sloppy usage and low standards on the internet, in email, and now text messages, we have made proper punctuation an endangered species. In Eats, Shoots & Leaves, former editor Lynne Truss dares to say, in her delightfully urbane, witty, and very English way, that it is time to look at our commas and semicolons and see them as the wonderful and necessary things they are. This is a book for people who love punctuation and get upset when it is mishandled. From the invention of the question mark in the time of Charlemagne to George Orwell shunning the semicolon, this lively history makes a powerful case for the preservation of a system of printing conventions that is much too subtle to be mucked about with.


My Thoughts:
Huzzah! I finally finished this book after it languished on my nightstand for months and months. And why is that? I have no idea. I mean, I don't know that it's a book you would want to try to push straight through. It is, after all, a book about grammar and punctuation. On the other hand, it certainly deserved to be read faster than a couple of pages every few days and I absolutely would have remembered more of what I learned if I hadn't stretched it out so long.

Here's what I did learn:


As to that last point,  this book is filled with humor. Which, I suppose, you might gather from the title and the cover; but which, nevertheless, was a pleasant surprise. Truss gets that she's a stickler when it comes to punctuation, even calling herself and those like her "punctuation vigilantes." In talking about the name of a British pop music group named Hear'Say, Truss says:

"And so it came to pass that Hear'Say's poor, oddly placed little apostrophe was replicated everywhere and no one gave a moment's thought to its sufferings. No one saw the pity of its position, hanging there in eternal meaninglessness, silently signaling to those with eye to see, "I'm a legitimate punctuation mark, get me out of here."

"Now, there are no laws against imprisoning apostrophes and making them look daft. Cruelty to punctuation is quite unlegislated: you can get away with pulling the legs off semicolons; shrivelling question marks on the garden path under a powerful magnifying glass; you name it."

This one's a keeper. It will go on the shelf with my other reference books and may even (gasp!) be highlighted. And when I pull it off the shelf to check on a rule of punctuation, I may even reread passages just for amusement. I'll bet you never thought you'd hear anyone say that!