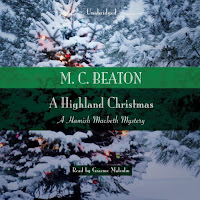 Publisher's Summary:
In the dark, wintry highlands of Lochdubh, Scotland, the spirit of Old St. Nick is about as welcome as a flat tire on a deserted road. The Calvinist element in Lochdubh has always resisted what they view as the secular trimmings of the holiday, so for most of the townspeople, there's no pudding, carols, banquets, gifts, or even whisky for Christmas.

Nor is crime taking a holiday, as Hamish soon finds himself looking for a missing cat belonging to a lonely spinster. Confrontational and curt, the unfriendly woman insists her pet was stolen. Looking into her eyes behind her heavily bolted door, Hamish can see her true problem-she lives in great fear...but what is she afraid of?

Then some thieves make off with a Christmas tree and lights in nearby Cnothan and Hamish must investigate. As if that isn't enough on his holiday plate, Hamish's romance of the new schoolteacher is going fine, until she mentions a perfect little girl whose family abhors Christmas...and whose behavior has recently become very imperfect.

Now it's up to Hamish to make things right. He has to protect an unhappy girl, unlock the secrets of a frightened old woman, and retrieve some stolen holiday goods. And he had better do it quickly, for the church bells will soon toll, and all of Lochdubh will be forced to face another dreary winter without the warm embrace of A Highland Christmas.

My Thoughts:
This being a Christmas tale, this is even more of a cozy mystery than usual - no dead bodies, no concerns for danger. I mean, a stolen kitten and some missing Christmas lights are hardly as exciting as a dead body on the moors. It's a bit boring, honestly; but at only two hours listening time, it went by quickly enough.

But it's Hamish, so you know I liked it, right? He can be cranky and a little self-centered, but he's right where he belongs and he's happy there. As ever, he's surrounded by the usual kinds of people: a boss who doesn't appreciate him, a cranky old woman, some uptight wealthy people, some colorful locals, and a woman who has the hots for him. And, of course, you know that he's going to solve the mysteries. This time, though, Hamish gets to do some real good - making people happy, pulling people together, and bringing Christmas to Lochdubh.

Graeme Malcolm is perfect as the narrator, as always, adding an extra layer of warmth to the story.

Fans of Hamish will probably like this one, but I wouldn't necessarily recommend it for someone who isn't already invested in Hamish's life.