Heirs of the Founders: The Epic Rivalry of Henry Clay, John Calhoun and Daniel Webster, the Second Generation of American Giants by H. W. Brands 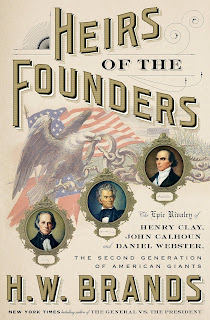 Heirs of the Founders: The Epic Rivalry of Henry Clay, John Calhoun and Daniel Webster, the Second Generation of American Giants by H. W. Brands
Published November 2018 by Knopf Doubleday Publishing Group
Source: my ecopy courtesy of the publisher, through Netgalley, in exchange for an honest review

Publisher's Summary:
In the early 1800s, three young men strode onto the national stage, elected to Congress at a moment when the Founding Fathers were beginning to retire to their farms. Daniel Webster of Massachusetts, a champion orator known for his eloquence, spoke for the North and its business class. Henry Clay of Kentucky, as dashing as he was ambitious, embodied the hopes of the rising West. South Carolina's John Calhoun, with piercing eyes and an even more piercing intellect, defended the South and slavery.

Together these heirs of Washington, Jefferson and Adams took the country to war, battled one another for the presidency and set themselves the task of finishing the work the Founders had left undone. Their rise was marked by dramatic duels, fierce debates, scandal and political betrayal. Yet each in his own way sought to remedy the two glaring flaws in the Constitution: its refusal to specify where authority ultimately rested, with the states or the nation, and its unwillingness to address the essential incompatibility of republicanism and slavery.

They wrestled with these issues for four decades, arguing bitterly and hammering out political compromises that held the Union together, but only just. Then, in 1850, when California moved to join the Union as a free state, "the immortal trio" had one last chance to save the country from the real risk of civil war. But, by that point, they had never been further apart.

On the heels of listening to Lin Manuel Miranda's Hamilton, this was the right book at the right time for me. This second generation of American leaders is every bit as interesting as the first generation and certainly deserve their fair share of attention. They faced some of the same battles as that first generation - battles with Britain, battles of egos, and a battle to make a new country of a disparate collection of states. But they are also forced to deal with the unfinished business of that first generation. Is this group of states a confederacy or a union? How does this new country find its place in the world? And what to do about the question of slavery?

You can't write about Calhoun, Webster, and Clay without talking about the other key players of their generation: Andrew Jackson, John Quincy Adams, James Madison, James Monroe, and Chief Justice John Marshall. Which means that there are a lot of players to talk about and keep track of and Brands manages to do all of that without losing sight of who and what his book is about.

Unlike George Washington, who reluctantly accepted the presidency, Calhoun, Webster and Clay spent their entire political lives working to put themselves into that position. The maneuverings were fascinating as were the ensuing battles between these players. While all three rose to the heights of the young government, none of them ever reached the goal they so coveted.

What was, perhaps, most interesting about this book for me about this book was how much what is happening in our country currently echoes what was happening in the first half of the nineteenth century. The politicians battled each other endlessly. At least, our current politicians only battle each other with words and not with pistols in duels. The country was hopelessly divided - the South, the West, New England. They battled over the Constitution and states' rights. They battled over taxes. Sound familiar? It all started to feel like we were reliving history right now.

As someone who grew up with the study of the U. S. Civil War as a part of regular life, it's always interesting to me to read accounts of the events that led up to the war. The only problem with reading books like this turns out to be my dad's problem because I'm bound to put the book into his hands to get his opinion on it. This book is no exception. I hope he enjoys it as much as I did and can learn some new things to add to his knowledge of these captivating men. I definitely recommend it for all fans of U.S. history, particular politics.
Posted by Lisa at 1:30 AM
Email ThisBlogThis!Share to TwitterShare to FacebookShare to Pinterest
Labels: book review, nonfiction, Nonfiction November, U.S. history