Where The Sidewalk Ends by Shel Silverstein 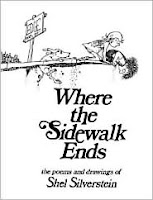 Where The Sidewalk Ends: poems and drawings of Shel Silverstein
176 pages
Published November 1974 by Harper Collins
Source:My kids got this one for Christmas 1995

The Barnes and Noble site says this one is recommended for ages 9-12; to which I say phooey. My boys were both younger than this when they got this book and they loved it. I'm a couple of years older than 12 now and I found it delightful.

Silverstein uses all types of rhyme and poetry, including one poem that runs down the neck of a giraffe and another that is written on a woman's nose. He never talks down to the reader and using humor even manages to instill a few life lessons. I've read this book many times with my kids but this time suddenly caught the poem advocating vegetarianism, the one bemoaning the idea of bringing a child into the a world filled with pollution and war, and one advising against racism.

Small as a peanut,
Big as a giant,
We're all the same size
When we turn off the light.

Rich as a sultan,
Poor as a mite,
We're all worth the same
When we turn off the light.

Red, black or orange,
Yellow or white,
We all look the same
When we turn off the light

So maybe the way
To make everything right
Is for God to just reach out
And turn off the light!

How did I not notice these before? Oh yeah--it was probably because some of the time I was traveling down memory lane. Where The Sidewalk Ends includes the poems "Boa Constrictor" which was recorded by Peter, Paul, and Mary and "The Unicorn" recorded by The Irish Rovers, both songs I loved growing up.

One of my kids favorites:

Teddy said it was a hat,
So I put it on.
Now Dad is saying,
"Where the heck's
the toilet plunger gone?

When my oldest got a sink plunger as a joke a few months after they got this book, Mini-me promptly placed it on his head just like Shel Silverstein's drawing!

I picked this one up again as part of the You've Got Mail challenge. I had so much fun with this one, I'm going to have to pull another of the kids' poetry books off the shelf!
Posted by Lisa at 10:24 PM
Email ThisBlogThis!Share to TwitterShare to FacebookShare to Pinterest
Labels: book review, poetry