A Christmas Carol by Charles Dickens

The Christmas Books: Volume 1 by Charles Dickens
includes A Christmas Carol and The Chimes
The stories were originally published in 1843 and 1844 respectively
Source: this copy was bought by my husband in college

Ebenezer Scrooge is a man who has lost all touch with humanity.  He is a truly awful man who cares for nothing more than his money.  Then one night he is visited by the ghost of his late partner, Jacob Marley.  Marley is weighed down by all of the evils of his own life and tells Scrooge that he will be cursed in the same way when he dies if he doesn't make changes in his life.

"But you were always a good man of business, Jacob," faultered Scrooge, who now began to apply this to himself.
"Business!" cried the Ghost, wringing its hands again. "Mankind was my business.  The common welfare was my business; charity, mercy, forbearance, and benevolence, were, all, my business.  The dealings of my trade were but a crop of water in the comprehensive ocean of my business."

Scrooge is then visited by three spirits.  The Ghost of Christmas Past takes Scrooge back to various scenes in his childhood and youth, reminding him of the sadness of his early years, the joy of his early adulthood and then again of the sadness of the end of a relationship because of his love of money.  Scrooge's heart begins to melt.

When the Ghost of Christmas Present visits and shows Scrooge all that he is missing and what people think of him, Scrooge becomes convinced that he needs to change his ways. He sees his nephew who says he will always continue to try to make amends with his uncle no matter the response.  He sees the home of his clerk, Bob Cratchit, and is particularly struck by Bob's crippled son, Tiny Tim.  This Ghost also makes Scrooge aware of his greater responsibility to mankind.  Under this Ghost"s robes are two ragged, forlorn children.  The Ghost explains to Scrooge:


"They are Man's."  "This boy is Ignorance.  This girl is Want.  Beware them both, and all of their degree, but most of all beware this boy, for on his brow I see that written which is Doom, unless the writing be erased."

But when the Ghost of Christmas Future comes to call, Scrooge is horrified to see his own demise and the reaction of those who knew him.  When he awakens after that last visit, he truly is a changed man.


"I will honour Christmas in my heart, and try to keep it all the year. I will live in the Past, Present, and the Future, The Spirits of all Three shall strive within me.  I will not shut out the lessons that they teach."


Charles Dickens wrote this novella at a time when Britain was experiencing a nostalgia for their Christmas traditions while at the same time beginning to incorporate new ideas such as Christmas trees and holiday cards.  It is said to have been inspired by Dickens' own youth, his sympathy for the poor and Washington Irving's writings.  In nearly 160 years, it has never been out of print and has been adapted for the stage, television, movies and even opera. 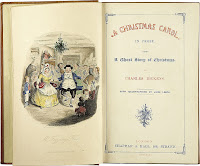 The first run of the book was 6000 copies which were first available on December 19 and sold out before December 24.  That may not be many copies by today's standards but I've got to say that I'm pretty impressed that 6000 copies of a book sold out in under five days in a time before there were wide PR campaigns for books, even if it was Charles Dickens who had, by that time, published "The Adventures of Oliver Twist," "The Life And Adventures of Nicholas Nickleby," and "The Old Curiosity Shop," all in serialized publication.
Posted by Lisa at 6:00 AM
Email ThisBlogThis!Share to TwitterShare to FacebookShare to Pinterest
Labels: book review, classic, historical fiction, holiday