Fairy Tale Fridays - The Mermaid In The Tree

This week at Fairy Tale Fridays, I'm featuring a story by Tim Schaffert from My Mother She Killed Me, My Father He Ate Me titled "The Mermaid In The Tree."  Each of the stories in this compilation is based to some extent on another fairy tale.  Schaffert's story is based on Hans Christian Andersen's "The Little Mermaid," a tale that Schaffert says is not only his favorite fairy tale, but also his favorite short story.

Desiree and her sister Miranda live in Rothgutt's Asylum for Misspent Youth where they have spent nearly their entire lives after being arrested for stealing candy from a baby.  The asylum is in the village of Mudpuddle Beach where mermaids regularly wash up and die on the shores.  Parades are held in Mudpuddle Beach featuring the bodies of some of the mermaids, preserved, posed and floating in giant tanks set on platforms pulled by rickshaws peddled by the girls of Rothgutt's.  After one of the parades, Desiree meets Axle, a young man who attends Starkwhip Academy of Breathtakingly Exceptional Young Men and the two are soon sneaking out to meet.  One night the two meet and Axle is in the process of giving Desiree an engagement ring when it slips from his hand and falls into the water below.  At nearly the same time, the two see a carousel figure break loose in a storm, wash out to sea and return to view with a mermaid clinging to it's neck.  Axle rescues the mermaid but Desiree is prevented from going with him to seek care for her and will not see him again for many months.  Axle falls in love with the mermaid and it proves his undoing. 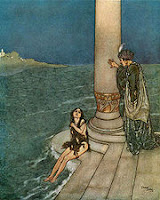 In the original tale of The Little Mermaid,  it is the mermaid who saves the prince and her love for him that proves to be her undoing.  In Schaffert's hands, there does seem to be more of a mutual affection although the mermaid's addiction to a drug that originally saved her seems to be more important to her than does Axle.

In addition to The Little Mermaid, Schaffert borrows the mermaid's name from a fairy tale (Rapunzel).  The darkness so prominent in early fairy tales is abundant in "The Mermaid In The Tree."  There is no living "happily ever after" for any of the characters.  But while the tale has many of the elements of classic fairy tales, there was nothing that set in a particular time.  In fact, there was something about it the had the feel of a dystopian story to me.  It also reminded me of Lemony Snicket's "A Series Of Unfortunate Events," notched up grown up levels.

You may recall me saying that Schaffert is the driving force behind Omaha's Lit Fest.  He has also published several books which are part of Unbridled Books' catalog (you all know how much I love Unbridled Books!).  I'm looking forward to reading his "The Coffins of Little Hope" which will be published April 2011.
Posted by Lisa at 12:23 AM
Email ThisBlogThis!Share to TwitterShare to FacebookShare to Pinterest
Labels: Fairy Tale Fridays, fairy tales, Hans Christian Andersen, Omaha author