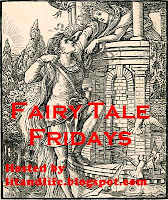 Last week in Fairy Tale Fridays, I mentioned that the writers at the Omaha Lit Fest didn't have a specific definition of "fairy tale."  On Sunday I told you that I had heard from Kate Bernheimer, who edited "My Mother She Killed Me, My Father He Ate Me."  Ms. Bernheimer said that she does have a definition "which is a bit circular; they are works of art that have a fairy tale feel."  Then she directed me to some wonderful essays she's written which can be found on her website.  In her essay titled "A Terrible Twist," originally published in Fences, Bernheimer writes:


"In fairy tales the author (authors) does not strive to represent a more real world that exists beyond its pages, but strives to create new worlds. To create sense. To create logic, as well as illogic.  To create time and space, not to reflect it.  To create possibility.  To create life in its becoming."

In an essay titled "Fairy Tale is Form, " Bernheimer introduces the reader to four formal components of fairy tales: flatness, abstraction, intuitive logic and normalized magic.  You may find some of these components in more recent writings but, says Bernheimer, "the first thing you always know about a fairy tale is that you are in it.  Immediately it announces that it is a form and that you are inside the form." 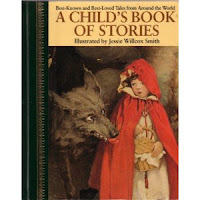 This week I read two fairy tales from a book we gave our children for Christmas in 1995, "A Child's Book of Stories," illustrated by Jessie Wilcox Smith.  The first was "Snow White and Rose Red."  This is not the story told in the Disney movie "Snow White."  In this book at least, that story is titled "Snow Drop."  "Snow White and Rose Red" is instead the story of two young girls who live with their frail mother.  These two girls could not be better people and no one every thinks to harm them.  Not even a bear that shows up at their home one cold night.  Their mother allows the bear to sleep on the hearth and soon the girls are treating him as if he were a domesticated pet.  When spring arrives, the bear leaves but tells them he will be back again.  One day shortly after the girls are in the woods when they discover a dwarf who has caught his beard in a log.  The only way the girls can find to save him is to chop off a small bit of his beard.  The dwarf is furious...as he is again twice more when the girls have to save him.  The fourth time they come across the dwarf, he is laying out some gem stones when suddenly the bear appears and kills the dwarf.  It seems that the bear is really a prince who had a spell cast on him that could only be broken by killing the dwarf and he is really a prince.  Who conveniently has a brother.  So, of course, the girls both marry one of the princes.

The second story I read was titled "Goldilocks; or The Three Bears" which was the traditional story of Goldilocks with which we are all familiar.  What was most interesting to me was that there was a second story in the book called "The Story of Pretty Goldilocks."  Until I read this book with my children, I'd never heard of this story.  It's the story of a beautiful princess who is the object of a certain king's desire.  When she turns down his first emissary, he sends another named "Charming."  The princess sets many task for Charming but I think you can already guess where this tale is going when it features a princess and a man named Charming!

Next week, Timothy Shaffert's story "The Mermaid In The Tree," which takes as it's inspiration Hans Christian Andersen's "The Little Mermaid."  Oh, and you all know how much I love Unbridled Books; imagine how excited I was to find Shaffert's books in their catalog.  I'll soon be reading his book "The Coffins of Little Hope."  Also next week, more on fairy tales from Kate Bernheimer.
Posted by Lisa at 11:08 PM
Email ThisBlogThis!Share to TwitterShare to FacebookShare to Pinterest
Labels: Fairy Tale Fridays, fairy tales