Fairy Tale Fridays - Just Exactly What Is A Fairy Tale? 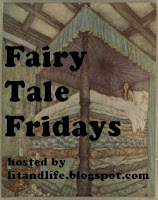 The American Heritage Dictionary defines "fairy tale" as "a fanciful tale of legendary deeds and creatures, usually intended for children."  Wikipedia says that they "typically feature folkloric characters fairies, goblins, elves, trolls, giants or gnomes and usually magic or enchantment.  Often the story will involve a far-fetched sequence of events."

Fairy tales rarely make reference to religion or any actual people, places or events and unlike folklore, they were generally never believed to be based on truth. One site I found says that fairy tales were not originally intended for children due to their bawdy and violent nature.  On the other hand, other sites say they were first intended as stories for children.

Interestingly, when I was at the Omaha Lit Fest this fall none of the panelists could actually give a concise definition of "fairy tale."  Not Timothy Schaffert who teaches about and writes fairy tales.  Not Keven Brockmeier who writes fairy tales.  Not Kate Bernheimer who compiled the book "My Mother She Killed Me, My Father He Ate Me," writes fairy tales and is the editor of three fairy tale anthologies.  Schaffert said "I just know one when I read one."  My plan of attack, then, will be to take the guess work out by picking up books that tell me they are fairy tales. Bernheimer did say that fairy tales have everyday magic and an absence of depth in the characters.  She also added that they are tales of survival of the weakest despite great brutality.

The Grimm Brothers, Jacob and Wilhelm, are perhaps the most famous tellers of fairy tales.  They first started collecting the tales as a way to preserve their Germanic heritage.  Once they say how popular the tales were with young people, they started to soften them up a bit but never to the point where they completely lost their appeal for adults.  Here's one version of "Little Red Riding Hood" that retains more of its violence.

Are you interested in reading some of those fairy tales you remember from childhood?  Project Gutenberg has an ebook version of "Favorite Fairy Tales."  These are probably the adaptations you remember reading--just enough violence and threat to make them scary but not so graphic.

I see I'm not the only one who's become infatuated with fairy tales lately.  The New York Symphony recently put on a reading of the new fairy tales in Kate Bernheimer's recent collection "My Mother She Killed Me, My Father He Ate Me."  Gregory Maguire, author if Wicked, did the introduction.

Which were your favorite fairy tales growing up?
Posted by Lisa at 6:00 AM
Email ThisBlogThis!Share to TwitterShare to FacebookShare to Pinterest
Labels: Fairy Tale Fridays, fairy tales