What a sad week at our house. My poor daughter, who lives for American Idol, was crushed when her favorite, Colton Dixon, was voted off. She has totally sucked me into watching the show with her and I was disappointed to see this kid voted off since he brought so much showmanship to the show. I am wondering, however, if now that he's gone, she'll lose interest in the show. If that happens, will I as well? It would sure be nice to be able to give myself those three hours a week to read again! 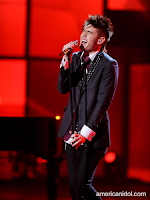 I feel like I'm treading water with my reading lately. With readalongs, I'm just not getting anything finished. Thank heavens for Dewey's Readathon, which I'm sleeping off right now! Much as I'm really starting to enjoy Bleak House, I'll be glad to have that chunk of reading done. Even moving at the faster pace that I'm getting through it now, every week's reading is taking me a few hours. I'd be half way through most of a "regular" book in those hours!

As for the read-a-thon, here are my answer's to the end of event meme:

Posted by Lisa at 9:59 AM
Email ThisBlogThis!Share to TwitterShare to FacebookShare to Pinterest
Labels: Sunday Salon