Lessons In Chemistry by Bonnie Garmus 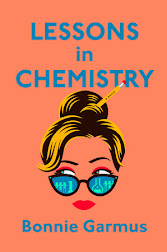 Lessons In Chemistry by Bonnie Garmus
400 Pages
Published April 2022 by Doubleday Books
Publisher's Summary:
Chemist Elizabeth Zott is not your average woman. In fact, Elizabeth Zott would be the first to point out that there is no such thing as an average woman. But it’s the early 1960s, and her all-male team at Hastings Research Institute takes a very unscientific view of equality. Except for one: Calvin Evans, the lonely, brilliant, Nobel Prize-nominated grudge-holder who falls in love with - of all things - her mind. True chemistry results.

But like science, life is unpredictable. Which is why a few years later, Elizabeth Zott finds herself not only a single mother but the reluctant star of America’s most beloved cooking show, Supper at Six. Elizabeth’s unusual approach to cooking (“combine one tablespoon acetic acid with a pinch of sodium chloride”) proves revolutionary. But as her following grows, not everyone is happy. Because as it turns out, Elizabeth Zott isn’t just teaching women to cook. She’s daring them to change the status quo.
My Thoughts:
It's not often I pick up a book that has a cover that looks like this one - these always scream "light and frothy" to me and I'm not really one to enjoy light and frothy in a book. Except for right now, when I'm feeling the need to read things that maybe aren't so heavy as so much as what I read which is why I picked this book for my first read of 2022.
I was so right and also so wrong about this book.
It was just the right book for me right now. But it wasn't altogether light or frothy.
It's funny, very funny. There's a dog whose thoughts we can hear, a small child who is beyond precocious, and a kitchen that is transformed into a laboratory. But Garmus also touches on sexual assault, religion, marriage, education, race, greed, parenthood, misogyny, and death. That cover, though, tells you that, in the end, good will prevail.
It seems that I'm drawn to characters that are tough for the other characters in the book to like (Olive Kitteridge, Margery Benson (Miss Benson's Beetle), Eleanor Oliphant) and Elizabeth Zott is no exception. Here is a woman who could have used her beauty but preferred to use her brain; plus, her social skills leave more than a little to be desired. Her insistence on being taken seriously because of her brain makes men uncomfortable; her looks and insistence on not settling into the usual female roles makes women distrust her. But she's had a terrible childhood, has grown up in an era where women are not valued, loses the love of her life, and finds raising a newborn overwhelming.
Enter a cast of characters who will get her through single parenthood and finding a way to put food on the table (here by literally putting food on the table!). So many fun characters who are so much more than filler.
Are there stereotypes? Yes. Is there a dog who knows almost 1000 words and whose thoughts we hear? Yes. Is there a four-year-old who is reading Norman Mailer? Yes. Are there an astonishing number of coincidences? Also, yes. I didn't care. I was 100 percent willing to suspend credulity and forgive stereotypes. I so wanted these characters to find happiness and for Elizabeth to be given the chance and the respect that she deserved. And while I may have mentioned that good will prevail, it doesn't necessarily mean that this book has the kind of happy ending you may be expecting. But it does have exactly the right ending. Which made for a perfect beginning of 2022 for me.
Posted by Lisa at 1:30 AM
Email ThisBlogThis!Share to TwitterShare to FacebookShare to Pinterest
Labels: book review, feminism, netgalley, women's fiction