Let Me Tell You What I Mean by Joan Didion 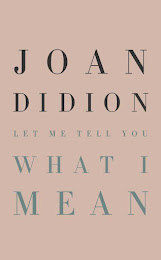 Let Me Tell You What I Mean  by Joan Didion
192 pages
Published January 2021 by Knopf Doubleday Publishing Group
Publisher's Summary:
These pieces from 1968 to 2000, never before gathered together, offer an illuminating glimpse into the mind and process of a legendary figure. They showcase Joan Didion's incisive reporting, her empathetic gaze, and her role as "an articulate witness to the most stubborn and intractable truths of our time" (The New York Times Book Review).

Here, Didion touches on topics ranging from newspapers ("the problem is not so much whether one trusts the news as to whether one finds it"), to the fantasy of San Simeon, to not getting into Stanford. In "Why I Write," Didion ponders the act of writing: "I write entirely to find out what I'm thinking, what I'm looking at, what I see and what it means." From her admiration for Hemingway's sentences to her acknowledgment that Martha Stewart's story is one "that has historically encouraged women in this country, even as it has threatened men," these essays are acutely and brilliantly observed. Each piece is classic Didion: incisive, bemused, and stunningly prescient.
My Thoughts:
It's been a while since I've read a collection of essays and every time I do I wonder why I don't read them more often. Fortunately, there are several collections of Didion's work that I have yet to read and I happen to own some. After reading this collection, I'm reminded of how great Didion's observations and writing are and why I need to get to those other books.
This collection includes a number of Didion's early essays, as well as some written in the late 1990's. What's most remarkable about the early essays is how well they still stand up in their observations. Didion calls out the media for its bias, those who miss the point of what makes Martha Steward truly a female icon, and false facade celebrity. The title of the collection truly is what ties this collection together - here Didion is explaining to readers exactly what she means and she never minces words.
It's surprising to me to learn, in this collection, that Didion felt like she was a "failed" intellectual given her intelligence, insightfulness, and interest in the human condition. Here she also writes about learning that she would never be a great writer of short stories when she was in college and cowed by her professor and the other students. For a woman who was so revered, it's remarkable to find her to be so humble.
I have one quibble with one of the stories in this collection. In Gaining Serenity, Didion writes about the experience of attending a Gamblers Anonymous meeting but it's not clear why she was there. Was she there because she herself had a problem? Was she there as a support for one of the addicts? Because one thing I have learned in the past few years is that observers are not welcome at these meetings. The word "anonymous" is in the name for a reason. If you haven't been involved in some way with the addiction, you will never understand what those meetings mean to the people who attend the meetings. Do some of the addicts seem to use the meetings as a kind of confessional that allows them to go out and sin again? Maybe. Does some of the dogma seem to say that the addition is in the hands of a higher power and perhaps out of the control of the addict. Perhaps. But Didion seems to have gotten hung up on two things: that many of the people relapse and that, in the end, they seem to echo one another in what they are saying. But the thing is, these meetings, and the recovery process they advocate, work. And, in the end, of course the addicts are all seeking the same thing, serenity. Aren't we all?
Ok, that was way more than a quibble. But it is the only complaint I have with this collection. Didion will always make you think and maybe rethink things you thought you understood. And that's always a good thing. As is this collection.
Posted by Lisa at 1:30 AM
Email ThisBlogThis!Share to TwitterShare to FacebookShare to Pinterest
Labels: book review, collection, essays, library