My Monticello by Jocelyn Nicole Johnson 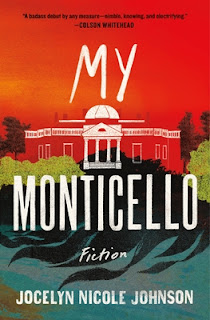 My Monticello by Jocelyn Nicole Johnson
224 pages
Published October 2021 by Henry Holt and Co.
Publisher's Summary:
A young woman descended from Thomas Jefferson and Sally Hemings driven from her neighborhood by a white militia. A university professor studying racism by conducting a secret social experiment on his own son. A single mother desperate to buy her first home even as the world hurtles toward catastrophe. Each fighting to survive in America.

Tough-minded, vulnerable, and brave, Jocelyn Nicole Johnson’s precisely imagined debut explores burdened inheritances and extraordinary pursuits of belonging. Set in the near future, the eponymous novella, “My Monticello,” tells of a diverse group of Charlottesville neighbors fleeing violent white supremacists. Led by Da’Naisha, a young Black descendant of Thomas Jefferson and Sally Hemings, they seek refuge in Jefferson’s historic plantation home in a desperate attempt to outlive the long-foretold racial and environmental unravelling within the nation.

In “Control Negro,” hailed by Roxane Gay as “one hell of story,” a university professor devotes himself to the study of racism and the development of ACMs (average American Caucasian males) by clinically observing his own son from birth in order to “painstakingly mark the route of this Black child too, one whom I could prove was so strikingly decent and true that America could not find fault in him unless we as a nation had projected it there.” Johnson’s characters all seek out home as a place and an internal state, whether in the form of a Nigerian widower who immigrates to a meager existence in the city of Alexandria, finding himself adrift; a young mixed-race woman who adopts a new tongue and name to escape the landscapes of rural Virginia and her family; or a single mother who seeks salvation through “Buying a House Ahead of the Apocalypse.”
My Thoughts:
I don't recall where I first heard of this collection but I'm sure I was as much drawn to it by it's title as it's content. I have revered Thomas Jefferson for most of my life, even knowing that he was wrong to have been a slave owner. It's only in the past decade or so that I began to consider him and his legacy more closely. What might a descendant of Sally Hemings think about Jefferson's Monticello? I knew I wanted to read that story.
This collection is stunning and thought provoking and so terribly sad. Sad because it makes plain how difficult life has been being black in America but even more so because it paints such a terrifyingly realistic of a future America where it is even more difficult. Each of the short stories in the collection is written in an entirely unique style and every one of them has its strengths. The first, "Control Negro," is, as Roxane Gay says, "one hell of a story." In it a professor asks the question, "Given the right conditions, could America extend her promise of Life and Liberty to me too, to someone like me?" To find out, he needs a "control Negro" and so impregnates a young woman then supports his son from a distance, making sure that he has every advantage a young white man might. It's brilliant.
But as I read the collection, as I so often do when I read books by and about black Americans, I wondered if I'm the best person to judge such a collection. I can tell you that I'm wow'd by this collection, by Johnson's writing, and look forward to reading more by her. But does it speak to those whom she is writing about? To answer that, I turned to Gay, who has this to say about the collection:
"It is a rare breed of writer who can tell any kind of story and do so with exquisite deftness. Jocelyn Nicole Johnson is one such writer. Her debut collection, My Monticello, is comprised of six stories of astonishing range and each one explores what it means to live in a world that is at once home and not. She dissects the unbearable burdens of such displacement. The crowning glory of this collection is the title story, a novella about a world that has fallen apart and a small band of people who take refuge in Monticello, among the old ghosts of the former plantation, how they become family, and how they try to make a stand for their lives, for the world the way it once was. This collection is absolutely unforgettable and Johnson's prose soars to remarkable heights."  - author Roxane Gay
Colin Grant, of The Guardian, has this to say:
Throughout the novel, there are echoes of the historical resistance of African Americans outnumbered and outgunned by foes, yet fighting back. As Da’Naisha’s band of walking wounded brothers and sisters prepare for one last stand, you fear the worst. My Monticello is a bleak story but reading it elicits the same kind of sensation that comes from listening to a poignant blues song: there is pleasure in its creation without denying the pain of the subject.
If you're a fan of short stories and you're prepared to be made uncomfortable, I can't recommend this collection highly enough.
Posted by Lisa at 1:30 AM
Email ThisBlogThis!Share to TwitterShare to FacebookShare to Pinterest
Labels: audiobook, book review, debut, diversity, netgalley, novella, short stories