Butter: A Rich History by Elaine Khosrova
Published November 2016 by Algonquin Books of Chapel Hill
Source: my ecopy courtesy of the publisher through Netgalley

Publisher's Summary:
It’s a culinary catalyst, an agent of change, a gastronomic rock star. Ubiquitous in the world’s most fabulous cuisines, butter is boss. Here, it finally gets its due.

After traveling across three continents to stalk the modern story of butter, award-winning food writer and former pastry chef Elaine Khosrova serves up a story as rich, textured, and culturally relevant as butter itself.

From its humble agrarian origins to its present-day artisanal glory, butter has a fascinating story to tell, and Khosrova is the perfect person to tell it. With tales about the ancient butter bogs of Ireland, the pleasure dairies of France, and the sacred butter sculptures of Tibet, Khosrova details butter’s role in history, politics, economics, nutrition, and even spirituality and art. Readers will also find the essential collection of core butter recipes, including beurre manié, croissants, pâte brisée, and the only buttercream frosting anyone will ever need, as well as practical how-tos for making various types of butter at home—or shopping for the best.

My Thoughts:
You know I totally judged this book by its cover when I requested it on Netgalley. But almost as soon as I downloaded, I began to have my doubts. Just how much history can butter have? How can anyone write an entire book about one ingredient and keep it interesting?

I hadn't even read the summary before I started reading. Which, once again, proved to be a good thing because I kept being surprised. Turns out butter really does have a rich history. 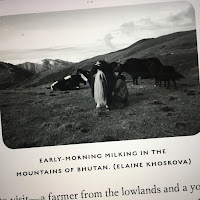 Khosrova starts the book with the story of a Bhutanese family who still operate their dairy "farm" operations just as their long ago ancestors would have. This story might not suck all readers straight into the book but it did for me. The Bhutanese people are near and dear to my heart ever since my son spent a year working with refugees from that country who, literally, treated him as one of their own when it was time for him to move. And then, too, it is the perfect bridge between the earliest records of butter and the ways it was made to today's modern factory settings.

And just what did Khosrova teach me?

1. There's a "slow butter" revolution going on as the demand for local goods and artisan products grows. Smaller, independent dairys are making butters that have all kinds of flavors other than that perfectly acceptable version we can buy every day. I'm on the prowl now to find places near me where butter making is a craft.

2. Oh, so much science! From the way in which a vegetarian animal manages to produce a product that is so full of fat to the reason butter is yellow but the cream it is made from is white; from the physics of making flavor to the science between margarine versus butter. Not since Henrietta Laks have I been so fascinated by science.

3. Butter has actually played a part in the history of a number of world religions. Seriously. Druids, Celtic pagans, Hinduism, Buddhism, and Christianity all feature butter in rites, celebrations, and as a means for control of believers. The Catholic church's demand that its followers abstain from butter during fasts caused a far greater hardship on those in the north who didn't have ready access to the olive oil that those in the south did during the Middle Ages, resulting in a Queen begging for permission to eat butter.

4. "Because dairying was closely identified with female rites of fertility, birthing, and lactation, strong cultural taboos against men handling milk existed for centuries around the world, and so the business of butter making free up squarely on the shoulders of hearty pastoral women." And so, butter making became the first real money-making, important job that women did. 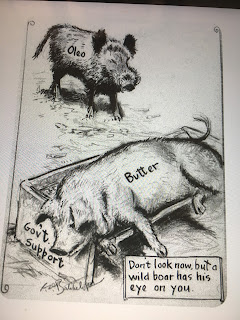 5. The evolution of butter making is truly an amazing story. From what was likely an accidental discovery, to dairymaids  (Marie Antoinette even had her own aristocratic dairy operation), to the industrial revolution (beginning with the cream separator), and the fall and rise again of butter, I was surprised to see what a big role butter played in history.

6. The battle between margarine and butter came about in no small part because of faulty research which claims a definite link between the fat of butter and heart disease. Unfortunately, the initial push to do away with butter was based on research from only seven countries. Seven. That original study entirely ignored the research available from fifteen other countries, including France and Holland, countries with a high consumption of dairy fat and low rates of heart disease. It also did not take into account any other possible reasons people with a high fat diet might also be more likely to suffer from heart disease. Soddy research like that gives science a bad name. And that lead to...

7. Laws. About butter and margarine and the color of both. How crazy is that?

8. And back to science - the actual science of how butter impacts other foods and what happens to foods that are baked with it. Which lead to...

The recipes. The reason I now have to pay for a book that I just read for free. Also, because I know so many other people who will want to read this book!