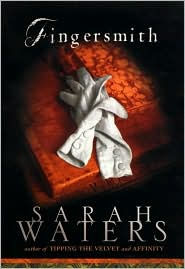 Fingersmith by Sarah Waters
Published 2002 by Virago Press
Source: this one is all mine
Short-listed in 2002 for the Man Booker Prize

Publisher's Summary:
Sue Trinder is an orphan, left as an infant in the care of Mrs. Sucksby, a "baby farmer," who raised her with unusual tenderness, as if Sue were her own. Mrs. Sucksby’s household, with its fussy babies calmed with doses of gin, also hosts a transient family of petty thieves—fingersmiths—for whom this house in the heart of a mean London slum is home.

One day, the most beloved thief of all arrives—Gentleman, an elegant con man, who carries with him an enticing proposition for Sue: If she wins a position as the maid to Maud Lilly, a naïve gentlewoman, and aids Gentleman in her seduction, then they will all share in Maud’s vast inheritance. Once the inheritance is secured, Maud will be disposed of—passed off as mad, and made to live out the rest of her days in a lunatic asylum.

With dreams of paying back the kindness of her adopted family, Sue agrees to the plan. Once in, however, Sue begins to pity her helpless mark and care for Maud Lilly in unexpected ways...

My Thoughts:
A few years back I read Waters' The Little Stranger and loved its moodiness, unpredictable story lines, and creep factor. I was told then that this book was even better. I picked it up shortly afterward but have held onto it, anticipation building. I might have held onto it longer but I began to fear that it could never live up to the expectations I was building.

My fears were unfounded. Holy buckets, did I like this book. It's everything I love about Charles Dickens with touches of the Brontes. It is dark and atmospheric and filled with bad people who can't help but kind of care about...until they make you wonder why. And while Dickens may know how to throw in a surprise here and there, he's got nothing on Waters. Twisty stuff this, folks.

The plot is truly masterful - the further along I read, the more I wondered how Waters could have plotted it all out and kept it straight. The book opens and ends with Sue narrating but in the middle it's Maud's voice we hear as she gives readers her side of the story Sue has just unveiled. Waters takes it down to the tiniest detail in joined narratives - what was meant by a word, a glance, and action and how it was perceived. It forced me to burrow into the story, trying to remember, as I read Maud's story, what Sue had said about the same incidents.

Let's be serious, I wanted to burrow into the book. I only wish I had had bigger chunks of time to sit and read. Do yourself a favor. If you haven't already read this book and aren't squeamish (there is some violence), clear a weekend and fall under Waters' spell.

Posted by Lisa at 1:30 AM
Email ThisBlogThis!Share to TwitterShare to FacebookShare to Pinterest
Labels: book review, England, historical fiction, mystery/thriller