West of Sunset by Stewart O'Nan 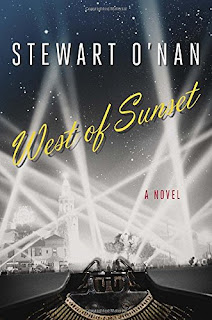 Publisher's Summary:
In 1937 F. Scott Fitzgerald was a troubled, uncertain man whose literary success was long over. In poor health, with his wife consigned to a mental asylum and his finances in ruins, he struggled to make a new start as a screenwriter in Hollywood. By December of 1940, he would be dead of a heart attack.

Those last three years of Fitzgerald’s life, often obscured by the legend of his earlier Jazz Age glamour, are the focus of Stewart O’Nan’s gorgeously and gracefully written novel. With flashbacks to key moments from Fitzgerald’s past, the story follows him as he arrives on the MGM lot, falls in love with brassy gossip columnist Sheilah Graham, begins work on The Last Tycoon, and tries to maintain a semblance of family life with the absent Zelda and daughter Scottie.

Fitzgerald’s orbit of literary fame and the golden age of Hollywood is brought vividly to life through the novel’s romantic cast of characters, from Dorothy Parker and Ernest Hemingway to Humphrey Bogart.

My Thoughts:
Dorothy Parker once said of Scott and Zelda Fitzgerald, "They did both look as though they had just stepped out of the sun; their youth was striking. Everyone wanted to meet him."

By 1937, though, not so much. Zelda's fragile mental health was a constant concern and Scott's books were out of vogue. No longer the golden boy, Scott was suddenly just like every other hack trying to make a living in Tinseltown. Albeit, one who had some pretty famous friends, including Ernest Hemingway, Marlene Dietrich, Humphrey Bogart and his wife Mayo Methel, and Dorothy Parker and her husband Alan Campbell.

There was so much to enjoy about West of Sunset. O'Nan is quickly becoming a favorite of mine and I'll definitely be pulling something else of his off the shelves soon. There's nothing fancy about his prose; he just "gets" what it takes to survive life's struggles.

Christopher Lane's narration was wonderful (my only little problem with it was his English woman's voice for Sheilah). I really wished I wasn't listening to it on disc so that I could have listened outside of my car; his tone and cadence are marvelous. I'll certainly be looking for more of his work.

O'Nan balances the glitz and glamour of life in Hollywood with Scott's daily efforts to fix terrible scripts, deal with flaky executives and the whims of the studios, and do right by the wife he is no longer in love with and the daughter he adores. Much of it comes from Fitzgerald's own letters and O'Nan did his best to work around the facts as they're known. Constraints like those can really hamper an author but O'Nan does a masterful job of getting into Fitzgerald's head and creating dialogue. And in creating empathy for man of whom it would have been easy to think "well, he got what he deserved after living the way he had lived."

Those paid reviewers had mixed opinions about this book when it came out last year. Maybe if I'd read it, it might have been easier to see who those who were less than impressed were seeing. I certainly didn't hear it. This one's going on my list of favorite audiobooks for the year.

Posted by Lisa at 1:30 AM
Email ThisBlogThis!Share to TwitterShare to FacebookShare to Pinterest
Labels: audiobook, book review, historical fiction